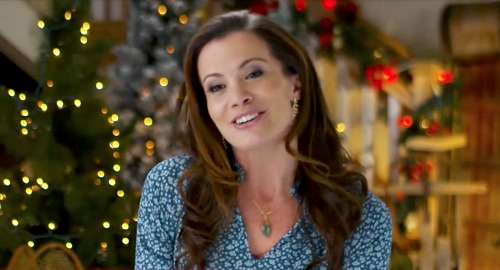 The Young and the Restless (Y&R) spoilers reveal that one CBS soap star had some exciting news to pass along. Melissa Claire Egan (Chelsea Newman) recently made her comeback at Y&R, but she filmed a fun movie during her time away from the show. Hallmark’s Holiday for Heroes is set to premiere this November, but Egan wanted to give fans a sneak peek of the Christmastime action.

On Twitter, Egan posted a link to a great video that Hallmarkmysteriesandmovies.com released. She tweeted, “A little behind the scenes sneak peak at our @hallmarkmovie “Holiday for Heroes!” Make sure to watch in November!” It looks like a sweet flick that’s sure to warm many viewers hearts once the holiday season arrives.

The film centers around Egan’s character, Audrey Brown, who owns a coffeeshop with her bestie, Jade Wilcox (Latarsha Rose). Audrey starts sending coffee to 1st Sergeant Matt Evans (Marc Blucas), who begins a correspondence with her through a “thank you” letter.

These pen pals develop a surprising spark before the stars align and Matt winds up stationed in Connecticut – where Audrey just so happens to live. It sounds like a true modern-day holiday fairytale. Since this is Hallmark, we know it’s going to have a happy ending!

Of course, Egan’s Young and the Restless character isn’t feeling the love – not for Adam Newman (Mark Grossman) anyway! Chelsea’s seemingly on the verge of rekindling her romance with safe Nick Newman (Joshua Morrow) instead of Adam, the bad boy she once loved despite his flaws and dark tendencies.

Many “Chadam” fans aren’t pleased about that, but there’s plenty of time for Chelsea to change her mind. A lot can happen in just a few months, so it’ll be interesting to see how things play out. The Young and the Restless spoilers say there’s tons more Newman drama ahead, so stay tuned.

How are you feeling about Chelsea’s Y&R comeback so far? Are you glad Chelsea’s on the show again? We’ll give you updates as other details emerge. Stick with the CBS soap and don’t forget to check CDL often for the latest Young and the Restless spoilers, updates and news.