BY hellodrdavis on September 23, 2019 | Comments: one comment
Related : Soap Opera, Spoiler, Television, The Young and the Restless 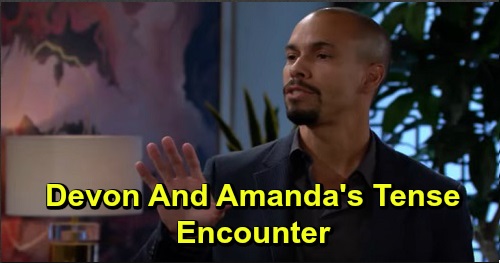 The Young and the Restless spoilers review for Monday, September 23, tease that Adam Newman (Mark Grossman) will be in rare form. First, he’ll badger Michael Baldwin (Christian LeBlanc), wondering why Victoria Newman (Amelia Heinle) hasn’t yet been charged with Victor Newman’s (Eric Braeden) murder. When Michael balks, Adam will remind Michael that with one phone call, he could have Fenmore “Fen” Baldwin (Zach Tinker) arrested.

Michael will comply, and later Rey Rosales (Jordi Vilasuso) will arrest Victoria as she’s dining at Society with Nick Newman (Joshua Morrow), Nikki Newman (Melody Thomas Scott), and Billy Abbott (Jason Thompson). Victoria’s family will be up in arms over the arrest, but later Michael will indicate to Lauren Baldwin (Tracey E. Bregman) that he has a plan to thwart Adam. Unfortunately, Nikki will be completely unaware of this, and she’ll rush home to let Victor – who is very much alive – know about Victoria’s arrest.

Later, Adam will meet up with Chelsea Lawson (Melissa Claire Egan) and Connor Newman (Judah Mackey), after Chelsea reluctantly agrees to let Adam see his son. Adam will work on Chelsea, telling her that Nick is falsely accusing him of tampering with Victor’s medication and pointing the finger at Victoria. Chelsea will be torn. Adam and Connor will have a good time together, and at the end of the visit Adam will tell Connor about Victor’s passing.

Adam will get really into it and tear up as he’s telling Connor about his grandpa’s death. Connor will be visibly upset by the news and embrace his dad sadly while Chelsea looks on, clearly wondering whether Nick’s right and Adam is the one who tampered with Victors meds. Adam’s plan to confuse Chelsea and undermine Nick will be moving right along.

Next, on the new episode of Y&R on Monday, September 23, Devon Hamilton (Bryton James) will update Jill Abbott (Jess Walton) about the challenge to Katherine Chancellor’s (Jeanne Cooper) will. They’ll talk at The Grand Phoenix, and Devon will note that the whole situation with Amanda Sinclair (Mishael Morgan) coming around to contest the will seems like a shakedown, and Jill will promptly agree.

Devon will note that he hasn’t been able to get hold of Tucker McCall (Stephen Nichols), which seems suspicious given that he’s the person who allegedly got Katherine’s lawyer to doctor the will. Jill will maintain that Chance Chancellor (John Driscoll) just wouldn’t be involved in something like this, and Devon will think that whoever sent Amanda to him is really messed up. He’ll confess that Amanda looks just like Hilary Hamilton (Mishael Morgan).

Neither Devon nor Jill will think that Amanda’s appearance is a coincidence, and Jill will be even more convinced that Chance wouldn’t try to inflict this kind of emotional turmoil on Devon. Devon will say that he intends to find out the truth, and as he’s walking out, he’ll bump into Amanda. She’ll be quite flippant and tell him that he’ll see the proof that he needs soon enough, and she’ll insinuate that he might have had knowledge of Tucker’s “fraud.”

That will be about enough for Devon, who will basically accuse Amanda of fraud since she looks like his late wife. They’ll argue, and it will come out that Chance isn’t leveling the claims himself because he thinks Devon won’t be receptive, but Devon won’t buy it. They’ll argue some more before Amanda storms off and phones a mystery person, saying that she needs to hear back from them and “nothing happens until I hear from you.” Just then, Nate Hastings (Sean Dominic) will walk up and spot Amanda, and they’ll stare blankly at each other.

It certainly seems like Devon doesn’t want to get drawn into this Hilary lookalike drama, but that’s exactly what’s going on. He’s getting distracted by Amanda and really needs to focus on the sheer legality of the situation and perhaps have his lawyer deal with Amanda directly, rather than have these tense run-ins with her himself. No matter who is behind this shakedown attempt – Amanda, Adam, Chance, or all of the above – Devon seems to need to separate himself from it for sure.