BY Heather Hughes on May 28, 2019 | Comments: one comment
Related : Soap Opera, Spoiler, Television, The Young and the Restless 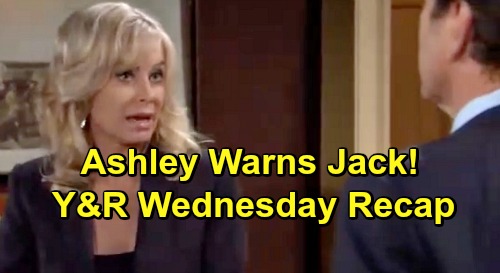 The Young and the Restless (Y&R) spoilers for Wednesday, May 29, tease that everyone will gather for Neil Winters’ (Kristoff St. John) will reading. Lily Ashby (Christel Khalil) won’t look thrilled to see Cane Ashby (Daniel Goddard), but he’ll promise he’s not a crasher. He was actually listed and invited.

After Lily thanks Cane for signing the divorce papers, Devon Hamilton (Bryton James) will walk over. He won’t be ready to hear what Neil has to say, but he’ll listen up anyway. Michael Baldwin (Christian LeBlanc) will begin reading Neil’s bequests, which include a Bible for Nikki Newman (Melody Thomas Scott). She’ll also receive an atlas with Katherine Chancellor’s (Jeanne Cooper) notes from her travels.

As for Victor Newman (Eric Braeden), he’ll get some special cigars along with Neil’s nameplate from Newman Enterprises. Cane Ashby (Daniel Goddard) will receive Neil’s forgiveness while Jack Abbott (Peter Bergman) gets control of the foundation. Jack will pipe up that they’re going to name their new treatment center after Neil.

The Young and the Restless spoilers say Ashley Abbott (Eileen Davidson) will be next. She’ll get $500,000 to use for an Alzheimer’s charity and the jazz record they once danced to. Olivia Winters (Tonya Williams) will get a sculpture as well as a Doctors Without Borders contribution. Over with Sharon Newman (Sharon Case), she’ll get Drucilla Winters’ (Victoria Rowell) old jewelry.

Malcolm Winters (Shemar Moore) will be left some childhood albums, which Dr. Nate Hastings (Sean Dominic) will promise to send to him. Afterward, Ana Hamilton (Loren Lott) will be overwhelmed when she receives Neil’s entire record collection. Neil made sure Moses Winters (Dax Randall) and Sofia Dupre (Julia Pace Mitchell) were taken care of, too. Most of Neil’s money will go to Lily since there’ll also be trust funds for the twins.

Lily will be touched when she gets a fairytale book that Neil read to her long ago. He’ll have an inscription that tells her to go find her happily ever after. After letters are provided to Moses and Neil’s grandkids, Devon will learn what was left for him. He’ll get Neil’s share of Hamilton-Winters – as long as he agrees to some terms Neil had in mind.

Neil wanted Nate to get a seat on the board of directors along with his penthouse. Finally, Neil will urge Devon to be generous and give others opportunities when he can. Once the will reading wraps up, Lily will chat with Cane briefly. He’ll wonder if her plans have changed, but she’ll stick to divorcing him and getting a fresh start.

Lily won’t be interested in having dinner with Cane, so she’ll bid everyone farewell and exit. However, she’ll seem emotional on the other side of the door. Back with Ana, she’ll be ecstatic when Devon makes her the co-head of LP. A little later, Devon will ask Elena Dawson (Brytni Sarpy) to dance to one of Neil’s records.

At Society, Y&R spoilers say Nikki will support Jack and Ashley. They’ll hear that Dina Mergeron (Marla Adams) is doing well in her new facility, but Nikki will understand how difficult the decision must’ve been. Over with Cane, he’ll slip off his wedding ring and put it in his pocket. Cane will also contact Traci Abbott (Beth Maitland) and hope they can meet up for a bit.

At the coffeehouse, Phyllis Summers (Gina Tognoni) will shut her laptop as Lauren Baldwin (Tracey E. Bregman) walks over. Lauren will bring up the shell company idea that Michael mentioned. She’ll fear Phyllis is caught up in a revenge scheme and will cause her own downfall.

Back with Sharon, she’ll show Mariah the jewelry she was given and learn her daughter’s considering a career change. Mariah won’t be sure she wants to host GC Buzz anymore. She kind of stumbled into TV anyway, and the whole stalker situation certainly wasn’t pleasant. Mariah will be concerned about her lack of skills, but Sharon will insist it’s never too late to start a new journey.

At the Abbott mansion, Jack and Ashley will get into a business-related argument. Ash will inform Jack about a company in China with a logo similar to Jabot Collective’s. Once Ashley exits, Jack will text Billy Abbott (Jason Thompson) and Kyle Abbott (Michael Mealor) to meet him about something urgent.