BY Heather Hughes on January 25, 2019 | Comments: one comment
Related : Soap Opera, Spoiler, Television, The Young and the Restless 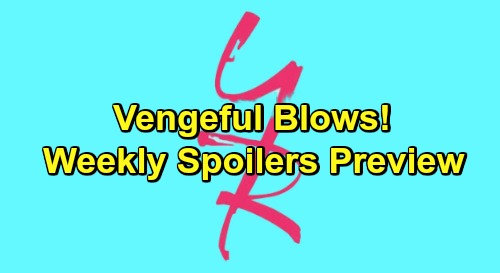 The Young and the Restless (Y&R) spoilers for the week of January 28-February 1 tease that some shockers are brewing in Genoa City. First, Victor Newman (Eric Braeden) will want to get a few things straight with Arturo Rosales (Jason Canela). He’ll get updates on Abby Newman’s (Melissa Ordway) engagement and warn Arturo to treat his daughter right. If Arturo screws up, there could be serious consequences.

Of course, Arturo already knows that. He’s not just worried about Victor’s wrath either! Arturo seems to truly care about Abby, so he won’t want Mia Rosales (Noemi Gonzalez) messing this up for him. However, there’s certainly still a spark between Arturo and his ex. It’ll be hard for Mia to leave it alone, so Arturo will be working overtime to avoid temptation.

Other Young and the Restless spoilers say Summer Newman (Hunter King) will be MIA briefly, but she’ll quickly surface in Genoa City. She’s headed home with a strong sense of determination. Summer gave up on Kyle Abbott (Michael Mealor), but she’s changed her mind. During her latest stint, Summer will hope she can finally get her man and score the future she wants.

Summer will count on Fenmore “Fen” Baldwin’s (Zach Tinker) help, so stay tuned for their eventual plot to break up Kyle and Lola Rosales (Sasha Calle). In the meantime, Y&R spoilers say Fen will push Kyle to his limit. They’ll be recruited for a modeling project this week, but they’ll struggle to endure each other long enough for a photoshoot.

Later, Jack Abbott (Peter Bergman) and Kerry Johnson (Alice Hunter) will reevaluate their relationship. They’ll take stock of where they’re at and determine if it’s worth it to keep going. Jack has nagging doubts about Kerry’s honesty, so he may have some doubts. Can Kerry keep Jack interested with her lies or will she have to reveal her big secret?

Back with Victor, another dose of revenge is headed his way. The cover-up crew’s tormentor is targeting Victor as well, so it’ll become increasingly apparent that involves a serious grudge. Someone out there hates the Newmans with a passion, so Victor will do his best to handle it.

Unfortunately, Nikki Newman (Melody Thomas Scott) may manage to blow Victor’s strategy. She’ll make a huge mistake that could prove costly this week. As for Sharon Newman (Sharon Case), she’ll have to come clean about her role in the girls’ night gang drama. Nick Newman (Joshua Morrow) will call Sharon out for lying to him and get her side of the story.

Elsewhere, Billy Abbott (Jason Thompson) will open up to Phyllis Summers (Gina Tognoni). He may want more Victoria Newman (Amelia Heinle) advice, but he could end up falling for Phyllis again if this keeps up. Billy tends to change his mind frequently when it comes to the women in his life!

The Young and the Restless fans can also expect some tender moments between Victoria and her father. She’ll confide in Victor and get some reassurance in return. Victor will do everything in his power to keep Victoria safe. We’ll keep you posted as other Y&R news comes in. Stick with the CBS soap and don’t forget to check CDL often for the latest Young and the Restless spoilers, updates, and news.