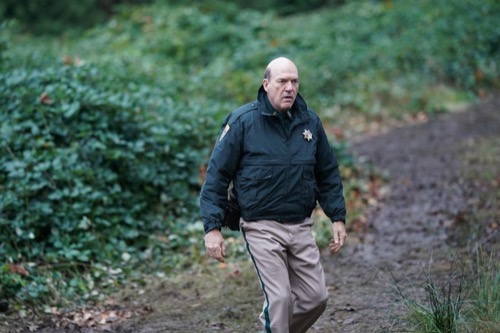 Tonight on ABC their new thriller by David E. Kelley, Big Sky premieres with an all-new Tuesday, December 2, 2020 episode and we have your Big Sky recap below.  On tonight’s Big Sky season 1 episode 3 ‘The Big Rick,’ as per the ABC synopsis, “Still on the search for the missing girls, Cassie grows more suspicious of Legarski after a threatening conversation between the two.

Meanwhile, Grace manages to make headway on the girls’ quest for freedom. Merilee pleads with Legarski to open up emotionally before it’s too late, and Helen finally confronts Ronald about his increasingly strange behavior.”

Grace, Jerrie, and Danielle are trying to free themselves. Meanwhile, Ronald is making breakfast and his mother startles him. She tells him that she is only as healthy as her sickest child. She has a nose for things and she doesn’t like the stink. Ronald looks a little worried.

The girls are loose and trying to get out. Meanwhile, Legarski is up, he tells his wife he was up at three. He asks if she is leaving, he says if she does she would feel less alone. She asks him what has he done.

Cassie is at the sheriff’s station and speaking to Tubb, he tells her that she is going to have to wait 48 hours before they do anything and he is going to tell her the same thing he told Jenny, they will look into it.

Ronald is in his truck on the way somewhere.

Grace returns to see Legarski, he mentions that he knows she went to see his ex-wife and ask questions. She tells him that things are not adding up about him. He says he went the extra mile for Cody and for her. He says he has the right to arrest her right now on any grounds he wants, he is the law there. As she is leaving, he tells her that they got off on the wrong foot, he does aim to protect and serve and wants to find the girls as much as she does. He tells her that he doesn’t like her attitude, she drives away.

The girls have kicked through the wall of the container, Grace is out. Jerrie tells her that Ronald took her up a trap door, there should be a ladder. She finds the ladder, but the door is locked. Grace finds a drain, it might lead to a sewer; she thinks there may be a way out.

Cassie is back in the office, Jenny says she is heading to the church where Cody was last headed. Meanwhile, Grace is still trying to get out. Jenny has arrived to see William Edwards, she is first asked if she has an appointment, then she is asked if she has a warrant. She says she didn’t think she didn’t need a warrant, she thought since he was a priest he would want to help to find two girls who are missing. Jenny is permitted entrance.

Ronald is back, Danielle screams for her to either get out or get back in the container. Ronald is coming down the stairs and Grace falls through to the sewer, he opens the container and sees that there are only two girls. He jumps through the water and goes into the sewer after Grace who is trying her very best to get through. Ronald tells her that if she doesn’t go back she is dead. All of a sudden, there is some kind of explosion, and Grace and Ronald are separated by debris.

Ronald returns, Danielle is frantic screaming for her sister.

Jenny is with William Edwards, she says she is not looking for a fight, just two missing girls and a missing husband. He asks her what she is doing there, she says Legarski led her there, he said the place can be an attractive nuisance for young women. He says they are not there, he keeps track of people coming and going. He tells her to feel free to look around, and even at the security camera footage.

Legarski arrives at the container area and Ronald tells her that one of them got away, but more so he thinks she may be buried alive. He yells at him and says her freedom means an abrupt halt to their freedom. Before he leaves, he tells him that he is very disappointed in him.

Danielle and Jerrie are alone, Danielle is worried her sister may be dead. Jerrie says her money is on her sister had gotten free. Ronald gets the excavater and starts digging, hoping to find Danielle’s dead body. Meanwhile, Legarski takes an off-road vehicle and goes looking for Grace in case she escaped. Grace is alive, she is still in the sewer and sees light. She only has one boot on, Ronald found the other one in the rubble. Grace is running down a road, similar to the one that Legarski is driving down. She takes off the other boot and discards it.

Cassie gets a call from Jennie who tells her that Cody never arrived at the church, she checked all the footage. She says she has to go home and talk Justin off a ledge, he is worried sick, she asks her to go by later so they can compare notes.

In the container, Danielle asks Jerrie when she knew she was different than what she was biologically born. She says when she was four-years-old. When she was fourteen she went to her parents and told them she was a girl and they sent her straight to therapy, and then they threw her out. Their love was not quite as unconditional as it was cracked up to be. She ended up in a trailer park. Jerrie moves closer to Danielle and holds her hand.

Legarski is still out looking, he finds Grace’s footsteps in the mud. Meanwhile, Ronald returns to the container, the girls go to attack him but he has his taser and he gets them both. Ronald returns to the excavator and takes a tooth out of his mouth that fell out when Jerrie hit him. Grace is still running, she is near the water and still running for her life. Legarski has found the boot she discarded, he is hot on her trail.

Jenny arrives home, she puts her arm around her son and tells him nothing yet. She tells him that his dad has disappeared before, but he says this is different, he is dead, he just knows. Jenny grabs and hugs him.

Grace is still running, she is in an open area near the beach, she sees a man fishing and yells for help. The man comes near her and tells her to calm down, she tells him what happened. Meanwhile, Legarski is coming around the corner, he has a crossbow, he watches Grace try to cross the river with the man and shoots him with an arrow, Grace turns around horrified and sees Legarski.

Legarski approaches her, he says he heard her screaming and had to act quickly. She realizes that he is not on her side, she attacks him with the fishing hook to the face, then he shoots her in the leg with an arrow, but she keeps on running, he hits the leg again, this time she stops, she can’t move from the pain in her leg. He breaks the arrows and pulls them out of her legs. Legarski disposes of the fisherman’s body, he wraps it up and dumps it in a pool of waste.

Cassie arrives at Jenny’s house, she tells Justin that she is sorry about what is going on. Jenny says they are no further at the end of the day than the beginning. She thinks she is right, Legarski, Cody goes to see him, and then he vanishes. Cassie says that he is squeaky clean but she knows he is bad. Both women admit they are not fine.

Ronald is still excavating when Legarski shows up with Grace and tells him that he kidnapped the wrong girls. Grace is returned to the other two girls in the container, Jerrie asks Legarski if he is there to help them, he closes the door and leaves. Outside, Legarski tells Ronald to seal up the container so they can’t get out and leave them food for a few days, they need to lay low. Ronald asks what the plan is and Legarski says he doesn’t know.

Cassie leaves Jennie’s house and she is crying. Meanwhile, Jenny is in her bedroom and she is having a drink, she is crying too. Danielle tells Grace that she has serious wounds, Jerrie thinks she may need stitches. Grace tells them that Legarski killed a fisherman who was going to help her. Ronald tells them to shut up, she tells him to shut up and that she is just getting started.