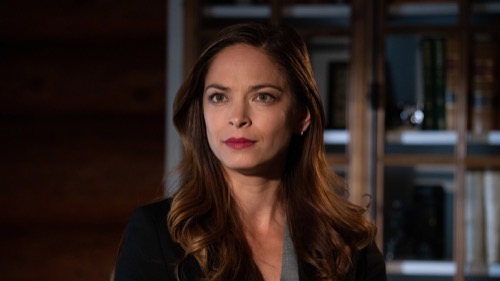 Tonight on the CW their legal drama Burden Of Truth with an all-new Thursday, June 25, 2020, episode and we have your Burden Of Truth recap below. On tonight’s Burden Of Truth season 3 episode 6 called “It Takes A Village” as per the CW synopsis, “Joanna reluctantly agrees to try to put together a class-action suit in an attempt to build a case against ClearDawn labs for the wrongful apprehension of children in Millwood. Meanwhile, Billy gets a tip from his father about a potential break in the case.”

Joanna is at her first doctor’s appointment. She is anxious and concerned with all of the mental illness on both sides of their family. She asks the doctor if she should proceed with the pregnancy. The doctor asks her what she wants.

Joanna and Billy try to find someone who knows about the lab. Billy brings up her appointment. She tells him she needs time to adjust. Luna calls. She wants to help Cali. Joanna tells her they don’t have time. Kat tells Luna to make a good case for Cali and then Joanna will be interested. Meanwhile, a representative from the lab calls. Joanna meets him for lunch. He wants to settle. She doesn’t want that but has to ask Kodie.

Owen stops one of his own cops from bringing in a pound of cocaine as evidence. He places it in a backpack in his cruiser.

Taylor shows up at Diane’s. She tells her how she hasn’t been feeling well, a little depressed, while they talk over tea. Taylor confesses to following a guy who used to work for her dad. She is scared.

Luna visits Cali who turns down her help after her boyfriend gets angry. Meanwhile, Billy and Joanna talk about the settlement while on their way to Kodie’s. Billy runs into his Dad who wants to help.

Kodie shares new paperwork from the state sharing she has 90 days before her children become wards of the state. Joanna decides they need to move forward with a civil suit. Later, Joanna, Billy, Kat, and Luna go door to door about their suit. Luna visits Cali to try to help her one more time

After getting doors slammed in their face, they attempt to make a commercial to reach the public. After running lines, Joanna gets upset and walks out of the room. Billy finds her and talks her through after she says she doesn’t want to do any of this.

Billy meets up with his dad at an AA meeting. There is a man there that has information on the lab.

Luna helps Cali while Luna brings Kodie to her meeting for plaintiffs. The room is full. The meeting doesn’t go well in the beginning.

Diane and Taylor sit at the local pub, talking about how small Millwood really is. Owen plants the cocaine in the truck of Sam. After seeing a young kid like himself tagging, he thinks about what he just did.

At the plaintiff meeting, Joanna confesses she is not a mother but she is pregnant. She thinks being a parent is tough enough and cannot imagine what they are all going through. After sharing, several people get up to sign on to the suit.

Luna and Taylor finally sit and talk. Taylor tells her about Sam and his meetings each week. Luna tells her she needs to tell Owen.

While meeting with the judge and the lab’s lawyer, Joanna and Billy initially get bad news until Joanna comes up with a new argument. She tells the judge and he sides with her.

Owen returns the cocaine. After, Taylor finds Owen to tell him about Sam. Billy and Joanna sit in a park and wait to hear from the judge while they talk about her pregnancy. When they return to chambers, they are told their civil suit has been denied.