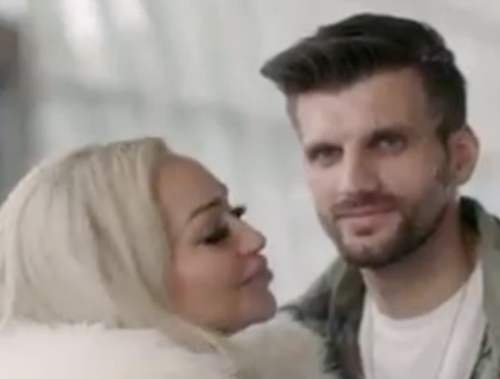 Tonight on TLC their new reality show Darcey & Stacey premieres with an all-new Sunday, August 30, 2020 episode and we have your Darcey & Stacey recap below for you. On tonight’s Darcey & Stacey season 1 episode 3 “Meltdown in Middletown,” as per the TLC synopsis “Florian’s past comes back to haunt him as Stacey’s friends and families start to question him about incriminating photos.  Meanwhile, Stacey confronts her past and must make an important decision about Georgi. ”

Darcey is upset because Stacey met with Tom. She is hurt, she doesn’t know why Stacey had to see Tom, she closed that chapter and she takes it like a slap in the face and a stab in the heart. Her dad noticed that her demeanor is low and she is not within her character. She owns what she did wrong but she honestly only wanted to love him. She is not where she wants to be in her life. She wants her own home, put down her own roots, her daughters in the right schools, and good relationships when they get older, and it’s scary.

Stacey is still in her hotel room with Florian, her fiancé. She tells him that it backfired, her intentions were good with Darcey and it foiled. She hopes her sister comes around and forgives her. Stacey tells Florian that he is staying at an Airbnb because her father doesn’t allow men to stay in the house

Stacey has a situation when driving back home, the windshield wiper doesn’t work and when it breaks, he calls her dumb. Obviously, Florian has a hidden temper. He admits he has a hot temper and his blood is hot. Stacey tells him that they have the family tonight and she wants to put this behind them, not to carry forward this negative energy. She definitely wants to come across to her family as a strong couple.

Darcey is still hurt at Stacey, but she has put that behind her to take the girls to dance class. Darcey is very vocal at the class and both girls are embarrassed. But overall, a good time is had by everyone. Darcey just got a text from Georgie, a guy who she has been talking to – but, she has decided to postpone seeing him. She wants to go to therapy first and let things go before she gets into another relationship. She is uncomfortable about tonight, but she is happy that Stacey has agreed to go to therapy with her.

Time for dinner, all the family is there. Their father says he is neutral, but he honestly doesn’t know if Florian can fit in. But if he messes with Stacey, he will mess with him. The initial greeting goes well, Stacey introduces him to everyone. Aspen and Aniko think he is nice. Florian says in Albania he has three sisters, and you can live for family and die for family. Stacey’s dad is impressed, he feels the same way about family. It warms her heart that they are creating a bond. Stacey’s dad says he is going to take Florian boxing, teach him some skills; he wants some private time with Florian to get to know him better. He tells Florian that he is home now, not in China because of a virus they have over there. Everyone is loving on Florian right now and Darcey is not impressed

Darcey gets up to get a soda, Stacey knows she is upset but she hopes she can push it aside just for tonight. Stacey gets up to follow Darcey, they go to the bar and talk. Darcey says she needs to be left alone to deal with her own past relationships. Darcey says she is willing to let bygones be bygones. And tomorrow, she wants to take her up on her offer to go to therapy with her. Stacey tells her that although she agreed, now is not the best time to do this. Furthermore, Stacey does not want to leave Florian when they only have ninety days. Darcey is hugely disappointed that Stacey will not even take one hour to be with her. Stacey wants to be there for Darcey, but she can’t drop everything in a split second. At the table, Darcey toasts to Florian and wishes him to welcome to the family and America.

Mike, Stacey, and Darcey’s father pick up Florian. He is concerned, he has seen the pictures of Florian with the other women. Mike takes him to the woods, on a trail to talk in private. Mike tells Florian there has been some noise about him and other women, he asks him what that is all about, is it real or not real. Stacey forgave Florian, so he knows he is good, but he didn’t expect Mike to discuss it with him. Florian tells him the photos look like more than what they are, and nothing is happening behind Stacey’s back. He is for life with Stacey and will do nothing to hurt her. Mike tells him that he wants his daughter happy, she looks happy.

Darcey visits her therapist, she tells her that the most significant thing going on is past relationships. She talks about her relationship with Jessie, how they talked about IVF and a promise ring was given, but it never went anywhere. Then she says she thought she felt safe with Tom, they were friends first. He as the shoulder to lean on, he was positive and closer to her age, similar life, traveled a lot, she thought he loved her. She feels like she is never good enough for these relationships and doesn’t deserve what she wants. Then she talks about her family, her older brother Michael, was like a father-type – he passed away at 27 of cancer. She always felt protected by Michael, because their dad wasn’t there 100%, he held the family together while their family worked. Her therapist tells her to love herself more, take time to self reflect on her.

Stacey and Florian are out to dinner with Debbie and Reina, Stacey’s friends. Stacey’s friends are concerned about those photos, just like Mike was. Reina mentions the photos and says they will be good as long as there are no other photos. Stacey is surprised they know, she is thinking that maybe Darcey told them. Stacey says she felt betrayed and hurt, but she chooses to believe Florian. He says he knows that it looked bad, but the past is the past. Florian looks like he is getting upset, he tells them that he doesn’t like the questions. The conversation starts to get heated, Stacey tries to calm it down, Debbie as well. Florian gets up, he says he didn’t go there for that.