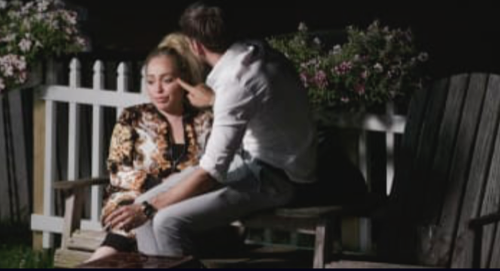 Tonight on TLC their new reality show Darcey & Stacey premieres with an all-new Sunday, October 11, 2020 episode and we have your Darcey & Stacey recap below for you. On tonight’s Darcey & Stacey season 1 episode 9 “First Impressions and Last Chances,” as per the TLC synopsis “Darcey and Stacey’s post-lockdown reunion with friends doesn’t go as planned when Florian finally comes clean about his ultimate betrayal. Meanwhile, Georgi’s introduction to the Silva clan hits a snag when it’s revealed that he’s still married.”

Yesterday, Stacey saw the other video of her husband with another woman. Her husband Florian had promised her that the photos as well as the videos she saw were nothing serious. He said they were from a professional photo shoot and that he wasn’t with someone else. He wasn’t cheating on her. But the videos themselves tell a different story. Florian was in bed with a woman he was kissing. They were laughing together and they even simulated sex together and how was Stacey was supposed to take it when she saw these videos? This was not a joke for her because if it started out that way then Florian took it too far.

Florian has hurt his wife with these videos. He crossed a line and so now she needed answers. Stacey later questioned Florian. She asked him if what she saw was the worst of it and he claimed it was. He also said that he was no longer in contact with the woman in the videos. They had met after she reached out to him over social media about doing a photoshoot together and so Stacey said this woman’s real motives were clearly to come after Florian. Stacey is still in love with Florian. She wants to believe him when he said that nothing else happened and so Stacey is choosing to stand by her man. She’s going to work on her marriage. She doesn’t care what anyone else has to say about it and that went for her twin sister, Darcey.

Darcey has been busy with her new man Georgi. He’s everything she ever wanted and he was also into her. The two of them were living together during the quarantine. Darcey moved in with him pretty fast because she wanted to get to know him. She didn’t want to waste her time on another relationship that went nowhere and so she tested this relationship like she’s never tested any other. She’s also introduced him to Stacey and Florian. She introduced him to her friends tonight and she didn’t shy away from discussing their situation. She told her friends that he’s still married. He’s been separated from his wife for a while now and he would divorce her tomorrow if it was possible.

Now, was just not the time for it. The courts shut down during the quarantine and so it really was impossible to get a divorce. Georgi is going have to stay married. He’s married and with Darcey and she’s the one having a problem with that. Darcey doesn’t like the fact he’s married. It messes with the dream relationship she’s always wanted and so Darcey was still trying to overcome that when she ran into Stacey and Florian at dinner with their friends. Darcey saw right away that her sister forgave Florian. She also didn’t like it because she knew her sister was sweeping the real problems under the rug and so she brought it up at the table.

Darcey let their friends know that the videos of Florian in bed with another woman went further than he originally stated it did. Florian repeated tonight that nothing serious happened and he also didn’t want to answer anyone’s questions. He just wanted to drop it. Florian told Stacey’s friend to shut the f*** up when she tried to ask him what really happened. He spoke over anyone else with questions and so Stacey got up from the table. She said her marriage is her business. She didn’t want to rehash old news and Florian agrees with her. They wanted to move on. They were tired of everyone else having an opinion.

When it was just the two of them, some of what her friends were saying got through to Stacey. Stacey did an about-face. She now wanted to ask questions of her own and so she asked Florian how bad was it really? She wanted to know if he slept with this woman. He said he didn’t. He said they just kiss and it wasn’t passionate because he didn’t feel anything with this other woman. Stacey and Florian then made up again. They decided to rejoin the others at the dinner table and by the time they came they didn’t show that there was any doubt in their marriage. They were united in saying they wanted to change the subject.

Everyone agreed to speak about something else. They all let the cheating scandal go for now and later on Darcey went back to focusing on Georgi. Georgi even let her do his hair. He has a head full of hair and Darcey loved playing in it. Darcey later brought Georgi around her family. She especially wanted him to meet her dad because her dad’s approval means a lot to her. Darcey and Georgi ran into Stacey and Florian at the family home. They were there to celebrate a birthday and to announce they got married. The birthday was no problem, but the announcement did come as a surprise to their dad Mike. Only Mike wasn’t upset. He knew his daughters were going to do whatever they wanted to do and so he happily welcomed Florian into the family.

Mike also later took the opportunity to ask Darcey how it’s going in her relationship. She told her dad that it wasn’t easy. She said she has to take a relationship a day at a time and she was going to leave it there only she didn’t know how to keep a secret from her dad. She felt bad for keeping secrets. It eventually got to Darcey and she told her dad that Georgi is married. Georgi also added that he was supposed to be divorced by now. He and Darcey are still dating and everything is going well. And yet Darcey’s father spoke with Georgi alone because he wanted to make sure Georgi wasn’t stringing Darcey along.

This divorce had to happen. Darcey should never be put in a position where she’s the other woman and her father made that clear to Georgi tonight.