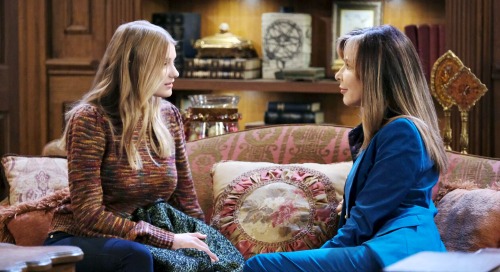 Days of Our Lives (DOOL) spoilers tease that Allie Horton (Lindsay Arnold) has had a tough time lately. As viewers are aware, Allie recently learned that neither the Salem nor the London authorities are going to pursue a case against Tripp Dalton (Lucas Adams) for her rape.

It’s been hard on Allie, and then to top it all off, she nearly shot Tripp but was held at gunpoint herself by Ava Vitali (Tamara Braun).

Now Allie really has no recourse but to settle into some semblance of a life and move on.

Or will she? Days of Our Lives spoilers indicate that Allie will soon seek help from attorney Belle Black (Martha Madison), and that could mean that Allie is considering going after Tripp in another way – perhaps for child support for Henry Horton (Jayna and Kinsley Fox).

Even though Allie really has no legal recourse against Tripp from a criminal standpoint, it’s possible that she could exert some authority over him for expenses related to caring for her son.

After all, Allie’s got DNA test results that purportedly show that Tripp is a DNA match to Henry, so it would make sense that a family court might rule that Tripp should financially support Henry.

Since this would be a civil matter, Allie would be able to go on with the case against Tripp, and if she won, at least it would be some sort of validation for her rape claim.

From Allie’s perspective, it would seem that the best that she can do in terms of the courts is to get Tripp to be forced to take responsibility for his child. Of course, it wouldn’t be the same as a criminal verdict against Tripp, but it might make Allie feel like someone believed her claim in some way.

And the fight could get interesting, since Tripp is adamant that he never slept with Allie. Yet, there’s a DNA test that’s been run several times that deems Tripp as the father. Tripp would probably stand a good chance of losing and being forced to pay child support for Henry.

Of course, a civil case against Tripp for child support might be just the impetus that Tripp and his parents need to dig a little deeper into Allie’s account of what happened to her.

In the coming days, Days of Our Lives spoilers say that Steve Johnson (Stephen Nichols) will have a talk with Allie about her assault, so it looks like he’ll start to investigate aggressively to get to the bottom of what really happened to her.

Right now, Steve and Tripp seem to believe that someone else must have attacked Allie a short time after Tripp left her in her flat in London.

That will likely be the tact they take in trying to defend trip against Allie’s claim that he should support Henry…although that’s going to be a hard theory to sell unless they can come up another attacker who shares Tripp’s DNA profile!

So, we might see the courts rule that Henry is Tripp’s and that he needs to support his son on an on-going basis. Do you think that Allie will come after Tripp for child support for Henry?

Stay tuned to DOOL and be sure to check back with us for all the hot new Days of Our Lives spoilers, updates, and news. Here at CDL, we’ve got you covered!