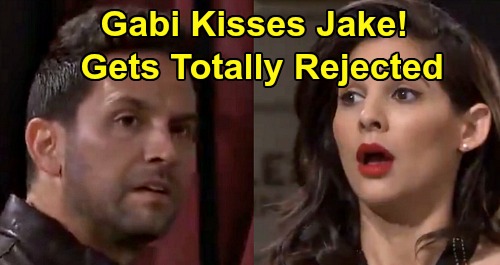 Days of Our Lives (DOOL) spoilers tease that Gabi DiMera (Camila Banus) is in for a big shock. As DOOL viewers know, Ben Weston (Robert Scott Wilson) was seriously jolted when he met the mechanic at the garage this past Friday, April 24th – the mechanic who looked eerily like Stefan DiMera (Brandon Barash). Well, during the week of April 27th, Ben will get to know this mechanic, who will introduce himself as “Jake.”

Jake will be very different from Stefan in terms of his demeanor and rough-around-the-edges personality, but he’ll look just like Stefan, and that’s going to floor Ben. It’s also going to completely take Gabi by surprise when she lays eyes on Jake for the first time.

And if you’ve seen the DOOL weekly promo for the week of April 27th, you know that Gabi won’t be prepared when she sees who she thinks is Stefan, casually lounging in town square.

Gabi will promptly faint, and Jake will rush over to help her out. From there, DOOL spoilers indicate that Gabi will insist that Jake is Stefan, and that he’s lying about who he really is. After all there is nothing that Gabi wants more in this world than ‘Stabi’ back!

Of course, from Gabi’s perspective, the idea that Jake is Stefan won’t sound so preposterous. After all, it’s just the type of miracle that Dr. Wilhelm Rolf (Wiliam Utay) could finagle. But to Jake, Gabi’s insistence that he’s someone else will just sound like crazy talk.

We all know Gabi, and she’s going to be pretty persistent in her belief that Jake is Stefan, probably to the point of being quite annoying to Jake. Gabi will probably go on about microchips, back-from-the-dead serums, and Dr. Rolf, while Jake will just want to get away from Gabi and go on with his life in peace.

But living in peace doesn’t seem like something that Jake’s going to get a lot of going forward – not with Gabi after him! In fact. During the week of May 4th, it looks like Gabi will intensify her plans to get to the bottom of who Jake is and where he came from.

In addition to begging Rafe Hernandez (Galen Gering) for help, which could be for assistance in tracking down Jake’s background, DOOL spoilers say that Gabi will take matters into her own hands when she plants a big kiss on Jake!

Perhaps Gabi will think that by kissing Jake, she’ll be able to jog his memory or perhaps call his bluff in insisting that he’s not Stefan. However, something tells us that Jake won’t reciprocate the kiss, and he’ll probably be really put off by the whole thing.

We can just imagine Gabi forcing herself on Jake with a big smooch and Jake having a big reaction…much like the reaction that Stefan had the first time Gabi kissed him!

In fact, for that reason, even if Jake is totally repulsed and rejects Gabi’s kiss, she might take it as a sign that he’s Stefan! It’s really hard to imagine Gabi being deterred from thinking Jake is Stefan by anything at this point, and she’s probably going to make it her personal mission to get to the bottom of what’s going on.

And if it’s at all possible, we recommend that Gabi start by visiting with Dr. Rolf in prison! We’ll see what happens between Jake and Gabi going forward, but something tells us that Gabi isn’t going to give up on this guy. And we don’t want Gabi to give up at all!

Stay tuned to Days of Our Lives and keep CDL at the ready for all of the latest DOOL spoilers and updates. We’ll keep you up to date on all the latest news as well!