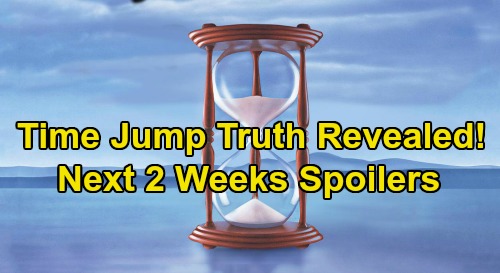 Days of Our Lives (DOOL) spoilers for the next two weeks tease that the drama’s about to heat up in Salem. During the week of January 13-17, Stefano DiMera aka Steve Johnson (Stephen Nichols) will try to explain. He seems to have convinced Kristen DiMera (Stacy Haiduk) that he’s her father, but she obviously doesn’t know how that’s possible at this point.

Stefano will reveal that he had his memories implanted into Steve’s body, so it’ll be a lot for Kristen to wrap her head around. However, Kristen will ultimately accept this and agree to help Stefano with his mission. They’ll run into some trouble when Abigail DiMera (Kate Mansi) shows up and barges her way in.

Abigail won’t get why “Steve” and Kristen are hanging out together, but “Steve” may give her the same bogus excuse he initially gave Kristen. He could argue that he wanted to grill Kristen about the hunt for Stefano. Even so, Days spoilers say Abigail will remain suspicious of their connection.

Over with JJ Deveraux (Casey Moss), he’ll get the full picture of how Gabi Hernandez (Camila Banus) controlled Lani Price (Sal Stowers). Later, JJ will arrive at the DiMera mansion soon after Eli Grant (Lamon Archey) proposes to Gabi. He’ll insist that Eli can’t marry Gabi since Lani still loves him with all her heart.

Of course, this will be JJ’s sneaky plan to get his hands on Gabi’s phone. JJ will provide a distraction and try to disable the pacemaker app, but he’ll likely face an obstacle or two. It doesn’t look like that app will be disabled just yet.

Next, Sarah Horton (Linsey Godfrey) and Eric Brady (Greg Vaughan) will head back to Salem. They’ll return after Mackenzie “Mickey” Horton’s treatment in Boston, but another round of bad news is coming up for these parents.

During the week of January 20-24, Days of Our Lives spoilers say some stunning flashbacks will reveal new details. It’ll be a five-episode event of missing time jump shockers, so DOOL fans will certainly want to tune in.

Summer’s alarming visit sent Maggie into a tailspin, which led to her drinking heavily. Maggie then caused the accident, which Sarah was wrapped up in and Will Horton (Chandler Massey) went down for.

Another DOOL flashback will focus on the death – or perhaps “death” – of Kristen and Brady Black’s (Eric Martolf) child. A kid switch is possible, especially since Xander Kiriakis (Paul Telfer) delivered Sarah’s baby.

There’ll also be new details on Haley Chen’s (Thia Megia) death, which resulted from Kristen’s shove and a fall down a flight of stairs. That much we already know, but Days spoilers say there’s a bit more to the story. Over with Tony DiMera (Thaao Penghlis), his flashback will involve Anna DiMera’s (Leann Hunley) crushing betrayal.

As for Will, Days of Our Lives spoilers say he confesses to killing Adrienne in this look at the past. Will was duped, so he truly thought he was behind Adrienne’s death. We’ll see some emotional goodbyes to Adrienne and Haley after their grim fates.

It sounds like the excitement’s about to rev up. We’ll give you updates as other Days news comes in. Stay tuned to DOOL and don’t forget to check CDL often for the latest Days of Our Lives spoilers, updates and news.