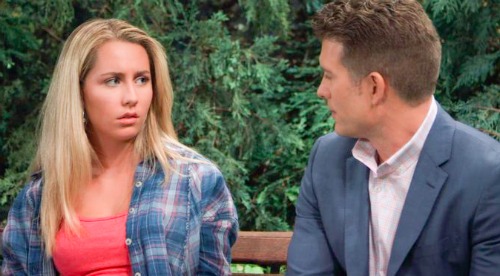 General Hospital (GH) spoilers tease that the ABC soap seems to be revving up a teen crush. GH fans know Josslyn Jacks (Eden McCoy) bonded with Dustin Phillips (Mark Lawson) after he gave her some solid advice. Dustin felt like it might help Joss to write her feelings down in a journal. He thought it’d be a good way for Josslyn to process her grief following Oscar Nero Quartermaine’s (Garren Stitt) death.

Dustin’s advice indeed seemed to help, but Joss has gone a bit overboard. She’s almost obsessed with journaling – and the fact that Dustin suggested it may be part of the reason why. Of course, Dustin was also Josslyn’s hero down on the docks.

Dustin saved Joss as well as Michael Corinthos (Chad Duell), Sasha Gilmore (Sofia Mattsson) and Laura Collins (Genie Francis) by showing up when he did.

That just further shaped this this perfect image in Josslyn’s mind. Joss wasn’t all that interested in the winter formal until she realized Mr. Phillips would be there.

Josslyn ultimately decided she’d attend after all, so Joss’ crush seems to be growing. Since Dustin’s an adult and Joss is just a lovestruck teen, this can only lead to bad news.

If Josslyn pursues this in any way, the best-case scenario would be that she ends up embarrassed and heartbroken. That’s obviously not a great outcome, but it’s far better than the alternatives! Those alternatives involve turning Dustin into a creep who’s willing to go there or a misunderstanding that spells trouble.

Dustin honestly seems like a nice, wholesome guy. If warm oatmeal cookies were a person, they’d be Dustin – not all that exciting, but dependable and sweet.

It’s tough to imagine Dustin suddenly being interested in Joss, especially since he’s shown no signs of it before. Dustin has been kind to Josslyn as his student, but no lines whatsoever have been crossed.

With that in mind, perhaps we should think about that last alternative – one that involves a misunderstanding. Could Joss make a move that lands Dustin in hot water? I

t’s easy to imagine Josslyn initiating something unwanted right as someone walks in. Dustin could face accusations, even if Joss tries to clear things up.

Could this lead to Dustin getting fired? It wouldn’t be all that surprising since GH is taking this student-crushing-on-her-teacher route. General Hospital spoilers and updates point to some hot drama no matter what, so don’t miss all the action.

CDL will pass along all the details as this storyline and others heat up. Don’t miss our daily General Hospital posts and all the extras along the way. We’ve always got all the latest General Hospital spoilers, updates, and news.