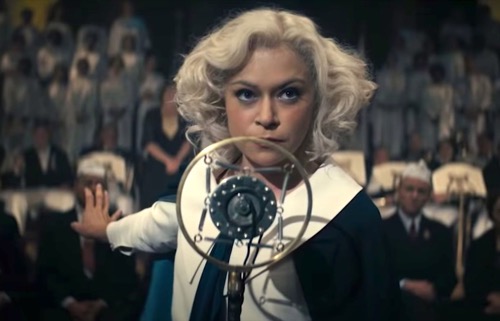 Tonight on HBO their new series Perry Mason Based on characters created by author Erle Stanley Gardner, airs with an all-new Sunday, July 26, 2020, episode, and we have your Perry Mason recap below. In tonight’s Perry Mason season 1 episode 6 called “Chapter 6,” as per the Showtime synopsis “Emily’s trial begins and a damning witness testimony takes center stage, while Mason attempts to recover from a shaky start. Meanwhile, in their search for clues that might lead to an exoneration.

Della and Strickland investigate a potential connection between Detective Ennis and Charlie’s kidnappers. Later, Mason considers betraying Drake’s trust to give his client an edge in court, and Birdy urges Sister Alice to scrap her Easter Sunday plan before it’s too late.”

Perry Mason the season 1 episode 6 airs at 9 PM – 10 PM ET on HBO. Make sure to bookmark this spot and come back for our Perry Mason recap! While you wait for the recap make sure to check out all our television recaps, news, spoilers & more!

The trial of Emily Dodson begins with Perry her lawyer. The prosecutor paints her as a woman in an extramarital affair who chose lust and money over her child’s life. Perry takes the floor to defend his client and struggles with a dry throat and nerves. Later, he tells Pete how he got very nervous.

Perry, Pete, and Della go over the police files and find several errors. The next day at court, the prosecution makes Emily’s estranged husband Matthew read a love letter Emily wrote to her lover, George. He became angry. Perry takes the floor and cross-examines Matthew. He delves into the past when Matthew learned his father was very rich. He moved Emily without telling her much. Perry also discusses how Matthew was in debt for gambling. Again, Matthew becomes upset, calling Emily names.

Pete arrives at one of the crime scenes to double-check the police’s work. Back at court, Perry disputes a last-minute witness. The judge allows the witness, a hotel manager. He takes the stand and discusses how Emily and George checked in with her baby, making love while the baby cried alone in an adjoining room. After, Perry yells at Emily. She needs to tell him everything. She cries. Sister Alice approaches Perry after, telling him he is too hard on Emily. Perry tells her not to come to court tomorrow.

That night Perry is distraught. Pete brings checks he found that may indicate George was stealing from the church. Pete also thinks Perry needs to call Officer Drake who walked the crime scene and wrote up the reports.

In court, Perry calls Drake and questions him about the trail of blood at the scene. It was awfully long.

Perry then points out that Detective Ennis was first at all of the scenes; the kidnapping and George’s suicide. Perry chooses not to bring up the dentures he found.

Perry and Della visit the church to look into whether or not George was stealing from them. Della steals a file while no one is looking.

Officer Drake is called in by his superior and given an envelope of cash for his good job at court. Meanwhile, Ennis is being prepped for court by the prosecution.

Perry gets a knock at the door. It is Drake. He talks about his job and racism. He is scared one day he is going to explode from it all. He shows Perry the money. He doesn’t like feeling owned. He gives Perry a piece of evidence. Now he can live with himself.

Della heads to get some records on the church while Pete questions a longtime local in Denver about two men associated with the case. Della finds Matthew’s very rich father in some of the church records.

At court, Perry introduces half of a denture during a cross-examination. It belongs to George Gannon and it proves he didn’t kill himself. The court goes wild. Behind closed chambers, Perry is reprimanded.

Officer Drake sends his wife to his aunt’s to keep her safe. Della brings Perry more pertinent evidence during recess. At court, a woman who was in jail with Emily takes the stand and lies, telling all Emily admitted to killing her baby. They bring Emily out of court with people angry and the press chasing them. Della comforts Emily who says she isn’t worried. Alice is going to bring her baby back.

Ennis’ partner arrives at his house. He wants to know just how dirty Ennis is. Ennis tells him he was hired to do a thing and it went sideways. Ennis’ partner wants whoever knows killed.

Perry heads to an address given to him by Della. When he arrives, a man with a gun answers the door. He has been waiting for Perry.