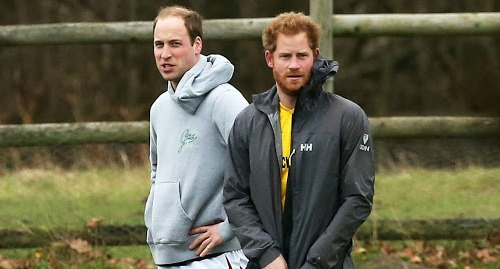 British royals news reveals that Prince Harry has been keeping in touch with his family back home since his move to Los Angeles, and that he’s been getting some advice from his brother Prince William as he’s attempting to settle into normal life not only in a new country, but in a town in which the paparazzi are relentless.

According to Us Weekly, a royal insider says that Prince Harry has been in touch with Prince William recently. “Moving to a completely different country is never easy for anyone, including Harry,” the insider said.

And there are of course special challenges for Prince Harry and Meghan Markle, since they’re now essentially Hollywood celebrities – like it or not.

The source went on to say that Prince William has shared his thoughts on Prince Harry’s living arrangements with his younger brother. “William’s advised Harry to return to London or move elsewhere, somewhere safer,” the source said. “He’s concerned about his brother’s well-being and safety.”

The source also reports that Queen Elizabeth has also reached to Prince Harry “to see if he’s ok and has offered to help out if needed.”

Prince Harry and Meghan Markle were said to be very excited to be moving to Los Angeles, but it seems that things haven’t really gone as planned. First off, the couple have been in lockdown for most of their entire stay in Los Angeles so far. Of course, that would have happened anywhere, but it has to be a disappointment.

And then there’s the issue of Prince Harry and Meghan Markle’s safety in their home. The couple is currently staying in Tyler Perry’s mansion in the Hollywood Hills, and despite the vast security system, the couple and their son Archie are dealing with drones flying on and around their property, ostensibly to keep up on their actions and snap pictures of the family.

The couple has also reportedly been chased by the paparazzi on an outing to deliver food during the current crisis. Prince William may be worried that Prince Harry has gotten himself and his family into a dangerous predicament being in Los Angeles right now. And at any rate, it seems that William has spoken his peace.

It will be interesting to see exactly what Prince Harry and Meghan Markle do once the lockdown has been lifted and life can resume in a more normal fashion. But will Harry and Meghan ever have any semblance of “normal” in Los Angeles? Time will tell. Be sure to check back with us here at CDL for more British royals updates and news.