The Bold and the Beautiful Spoilers: Brooke Furious As Hope Dumps Liam – Discourages Daughter From Falling For Thomas 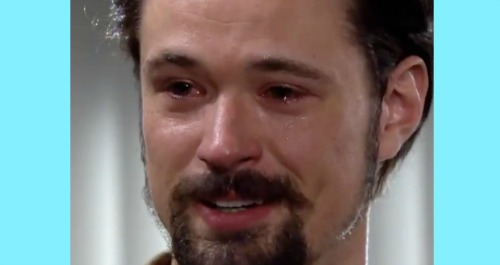 The Bold and the Beautiful (B&B) spoilers tease that viewers are in for some intense scenes in the coming days. As you might have seen in the new B&B promo for the week of November 30 – December 4, Hope Spencer (Annika Noelle) is going to have an emotional moment with Thomas Forrester (Matthew Atkinson) as he has a big breakthrough and realizes that he needs professional help.

Both Hope and Thomas are in tears in the scenes and appear to be sharing a real closeness.

Well, in the moments that follow this emotional scene, Thomas will collapse and start some heavy drama during which it’s going to be touch and go with his health.

Hope will be one of the people holding vigil by Thomas’ side during this time, so it looks like she’ll be highly invested in helping Thomas to get better. Surely, Hope will want Thomas healthy and happy for Douglas Forrester’s (Henry Joseph Samiri) sake.

While all this is going on with Thomas and Hope, B&B spoilers say that Liam Spencer (Scott Clifton) and Steffy Forrester (Jacqueline MacInnes Wood) will be getting reacquainted in a very intimate way.

Convinced (incorrectly) that Hope has cheated on him with Thomas, Liam will start drinking, and soon Steffy will join in. One thing will lead to another, and Steffy and Liam will end up in bed together.

So that means at some point, Hope’s going to learn about Liam’s affair with Steffy, and something tells us that she’s not going to be understanding this time.

B&B viewers will remember that back when Hope caught Steffy and Liam kissing on the cliff, it took months for her to take Liam back, so we doubt she’ll be understanding when she learns that (a) Liam thought SHE cheated, and (b) Liam just hopped into bed with Steffy as a result.

In fact, Hope may well call their marriage off completely once she learns about Liam’s cheating. And if Liam and Steffy decide to keep the affair a secret for a period of time before they admit to what they did, that’s only going to make things worse.

It’s probably not too much of a stretch to say that “Lope’s” marriage could be over in pretty short order.

Well, there’s one person in particular who’s not going to be happy about Liam and Hope’s marriage crumbling, and that’s Brooke Forrester (Katherine Kelly Lang).

As B&B viewers know, Brooke has been a champion of Liam and Hope’s relationship for a long time, and she’s not going to want her daughter to give up on Liam. Of course, Brooke’s not going to like it that Liam cheated on Hope, but something tells us that she’ll still lobby for Hope to find it in her heart to take Liam back.

But by the time Hope and Liam’s marriage is disintegrating before everyone’s eyes, Hope will likely have a new mission – to help Thomas recover and get better for Douglas’ sake.

In fact, we wouldn’t be surprised if Hope and Thomas end up getting much closer as Thomas recovers from his terrible illness. Thomas will need to something to cling to as he recovers, and that will likely be Hope and Douglas.

Even though Hope is quite aware of all the pain that Thomas put her through in the past, she and Thomas will have been through an intense experience together with Thomas’ breakdown.

And as Thomas rebuilds himself, he just might become the man that Hope has always wanted – someone who’s attentive to her, puts her first, and doesn’t keep running off to sleep with his ex!

If things do work out such that Hope and Thomas grow closer during Thomas’ recovery, you can bet that Brooke won’t like it one bit, and she’ll probably let Hope know in no uncertain terms that she needs to work on her marriage to Liam and leave Thomas be.

But something tells us that Hope won’t be able to leave Thomas alone, and that we could be looking at a “Thope” love story in 2021!

Do you think that we’ll see Thomas and Hope get together, despite Brooke’s disapproval? Stick with the CBS soap and remember to keep CDL bookmarked for all the hot new Bold and the Beautiful spoilers and news. We’ve got you covered!

A cry for help leads to a shocking moment! 😱 #BoldandBeautiful is new this week on @CBS and @CBSAllAccess. pic.twitter.com/lQT2ew8Kdw