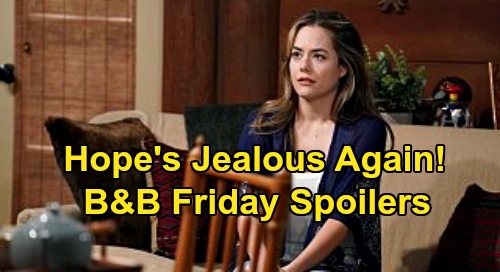 The Bold and the Beautiful spoilers for Friday, September 18, tease that Liam Spencer (Scott Clifton) will still be reeling from his contentious interaction with Thomas Forrester (Matthew Atkinson).

As B&B viewers know, Thomas totally lashed out at Liam and called him out on heavily contributing to Steffy Forrester’s (Jacqueline MacInnes Wood) vulnerability and emotional pain. This came after Liam went to Ridge Forrester (Thorsten Kaye) with his concerns about Steffy.

Well, it seems that Liam will share what’s been happening regarding Steffy with Hope Spencer (Annika Noelle). Hope and Liam will have a lot to catch up on, as Hope will learn about Liam’s impromptu visit to go see John “Finn” Finnegan (Tanner Novlan) at his office.

That will probably take Hope by surprise, and she may wonder what Liam is doing checking up on Steffy’s doctor.

Of course, viewers know that Thomas immediately picked up on the fact that Liam was bothered by the idea of Finn and Steffy being interested in each other.

It looks like Hope will pick up on that as well, as B&B spoilers say that she’ll disagree with what she sees as an over-the-top reaction to the situation on Liam’s part. That should leave Liam feeling pretty frustrated.

This whole situation could end up causing some friction between Hope and Liam, especially if Hope gets the impression that Liam is still feeling romantically protective of Steffy.

Of course, Liam will probably try to intellectualize the discussion and say that he’s just concerned about Kelly Spencer (Colette and Avalon Gray), but Hope will probably see the same thing that Thomas saw, and she’ll probably call Liam on it.

Meanwhile, on the new episode of B&B on Friday, September 18, Steffy will have to get creative about hiding her pill stash. As viewers are aware, Steffy got a few pain pills from Vinny Walker (Joe LoCicero) as a surprise gift.

Steffy was surprised and alarmed to get the pills, and so far, she hasn’t taken any of them, but she also hasn’t gotten rid of them or given them back to Vinny. And according to B&B spoilers, Steffy will soon start taking the illegal pills.

This will lead to the need for some evasion and deceit on Steffy’s part. Spoilers for Friday’s episode say that Steffy will end up hiding her pain pills somewhere, and this is only going to lead to trouble down the line.

Of course, Steffy has a young daughter in her home, and leaving pills hidden around the place is a recipe for disaster, as Kelly could find them and accidentally ingest them.

We’ll see who Steffy hides her pills from on Friday, but it could very well be Ridge, who will probably feel the need to check on his daughter after his conversation with Liam and Thomas over at Forrester Creations.

Steffy’s dependence on the pills will become more apparent in the next few episodes of B&B, and her decision to keep and hide the pills doesn’t bode well for what’s to come.