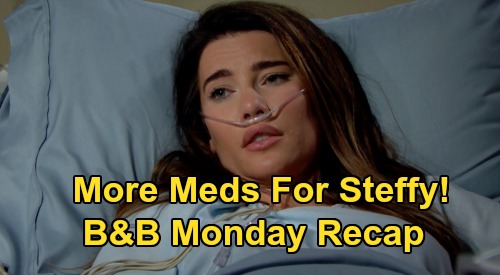 The Bold and the Beautiful spoilers recap for Monday, August 3, reveal that Sally Spectra (Courtney Hope) told Wyatt Spencer (Darin Brooks) that she hoped she hadn’t lost him entirely.

Sally apologized for reverting to the old Sally who wasn’t above doing anything to get what she wanted, and she acknowledged that she created a hoax. Wyatt just stood there speechless.

Meanwhile, outside Sally’s room, Dr. Joyce Griffith (Lisa Canning) told Flo Fulton (Katrina Bowden) that Sally needed her rest, and that she’d be back soon. Flo and Penny Escobar (Monica Ruiz) talked, with Penny insisting that she wasn’t a bad person – she just got caught up in Sally’s plan.

Flo noted that she knew something about getting caught up in someone else’s scheme. Penny hoped that Flo could find a way to forgive them.

Back in Sally’s room, Wyatt was about to finally say something when Flo walked in. Sally wondered if maybe Flo could get through to Wyatt, since Flo knew about getting caught up in lies and needing forgiveness.

Flo said that she did understand, but that Wyatt gets to decide what should be done here. Wyatt asked Flo to give him and Sally a few moments alone, and Flo stepped out.

Sally started in again about Wyatt forgiving her, and Wyatt said that he was very upset to have been led to believe that Sally was dying. Wyatt said that Flo had been horrible and selfish, and that she crossed the line when she kidnapped Flo.

Wyatt said that he should press charges, but he just can’t do that. “I think you should just go away for a while,” Wyatt told Sally. “Just stay away from Flo and me.”

Sally broke into tears as Wyatt said that she was an amazing woman, but that she needed to find that woman again. “So, goodbye, Sally,” Wyatt said, moving toward the door. Sally told Wyatt that she was really going to miss him, and she sobbed uncontrollably as Wyatt walked out.

In Steffy’s room, Dr. John “Finn” Finnegan (Tanner Novlan) asked Steffy to rate her pain, and Steffy said it was a 6 or a 7 on a scale from 1-10. Steffy said she wanted to continue to ride it out if at all possible as she writhed in pain. Finn indicated that it would take weeks before Steffy would heal, and that she should let the staff know if she’s pain.

Meanwhile, in the hallway, Ridge returned after talking to Taylor and Thomas. Liam and Bill went awkwardly away for coffee, and Ridge lamented about Steffy being in pain, then he told Brooke to go home and check on Hope Spencer (Annika Noelle) and Kelly Spencer (Colette and Avalon Gray).

Finn came along and Ridge asked about Steffy. Finn said that Steffy was trying to go it without pain meds. Ridge said he’d talk to Steffy about it.

Back in Steffy’s room, she tried to reach for a water cup, but the pain was too great. Steffy was writhing in pain when Ridge and Liam entered the room. Liam updated Steffy on how Kelly was doing, and Bill slipped in the room and apologized to Stefy again. “Bill, it was an accident, stop beating yourself up,” Steffy said.

Ridge wondered how Steffy was feeling, and Steffy said that she just wanted to get home to Kelly and that she couldn’t wait to hold her daughter again. Steffy then had another bout of pain.

Soon, Finn came in and shooed everyone out, saying that Steffy had a long day. Liam took off, and Bill opened his mouth to say something, prompting Stefy to say, “Bill, if you apologize again, I swear…” Bill responded with, “Yes, ma’am.”

Bill said that he’d come back in the morning to check on Steffy, prompting a side eye from Ridge. Bill left, and Ridge told Steffy not to be a superwoman and to let the medical staff help her.

Ridge took off, and Steffy writhed in pain. Finn returned and said that Steffy was obviously in more pain than she wanted her father to see. “Do you want more pain meds?” Finn asked. Steffy reluctantly agreed.

There’s a lot of B&B drama heating up, so stay tuned! We’ll give you updates as B&B news comes in. Stick with the CBS soap and let CDL be your go-to source for all the latest B&B news, hot spoilers, and daily episode recaps.