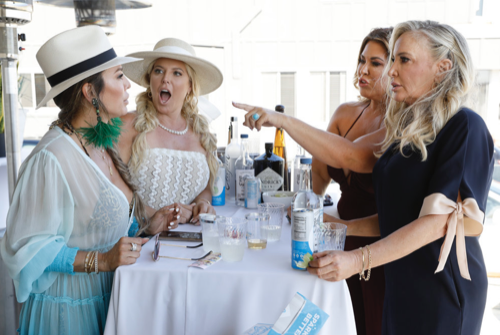 Tonight on Bravo TV the original housewife series, The Real Housewives of Orange County returns with an all-new Monday, October 21, 2020, episode and we have your RHOC recap below.  In tonight’s season, 15 episode 2 called, “Tequila Truth Serum,” as per the Bravo synopsis, “Kelly is focused on her future with fiancé Rick, but wonders how long her recently brokered peace with Shannon will last. Elizabeth and Jimmy bond over their shared Mexican heritage.

Braunwyn struggles with her identity and worries that her friends won’t stick around now that she’s not “fun” anymore. Gina reveals that she heard Braunwyn made fun of her “small house” but it turns out she isn’t the only one making disparaging remarks.”

Kelly tells Emily how Shannon has been calling her now that they are neighbors. They agree not to trust her especially since she and Kelly have had such a hot and cold relationship.

Elizabeth’s mother and the rest of her family is over. She is very happy. They talk about a book her niece has been reading which opens up a quick conversation about money. Liz’s mom jokes about how much money she spends. Jimmy is also over visiting. She loves how well they all get along. He is the opposite of her ex. He is also helping her get back to her Spanish roots.

Sean and Braunwyn celebrate Valentine’s Day. They have sparkling water. She tells Sean to drink, it is okay. She has been sober for 14 days. He orders a drink. She gets emotional. He tells her it is okay. They talk about their relationship. They haven’t been close since she stopped drinking. She also wonders if her friends will want to hang out still.

Shannon is working on Real for Real. She has used all of her money to finance this dream. She really needs this to work for her future and her kids.

Gina and Emily head out to eat. Gina shares how she has been eating and drinking really badly. Emily wants to share what Braunwyn has told her but she cannot. Gina knows Braunwyn has been talking about her and her family and she doesn’t know why. They joke about Braunwyn’s big house and wonder if Sean even works. After a few drinks, they decide to call her.

Gina calls Braunwyn. She calls her out. Braunwyn wants to talk but not over the the phone. She hangs up on Gina.

Kelly calls her mom while she packs. She is so happy about your relationship and how much better it is. She vents about her daughter and how she is turning into her mother.

Braunwyn and Liz meet up to shop. Liz talks about how her dad died of alcoholism. Braunwyn feels like she has been punched. Her dad died too from alcoholism and now she has been having problems. Not to mention Gina telling people Sean came on to her a while back. Braunwyn heads home and gets into bed. Sean comes home and comforts her. She heads out to meet up with Shannon later and tells her she thinks she is an alcoholic. At first, Shannon thought she may be pregnant but this clears it all up.

Emily gets her daughter’s party ready and updates her husband on Gina and Braunwyn’s drama before they arrive. After Braunwyn arrives, Emily explains to her why Gina is mad and that talking about her is the biggest problem. Emily talks about how Gina had a rough past year. Gina arrives. Things get awkward. Gina thinks it is all stupid since they are at a kid’s birth party. Meanwhile, Sean tells Braunwyn to give Gina a chance.

Braunwyn approaches Gina who doesn’t seem like she wants to talk. It becomes awkward once again.