The Young and the Restless Spoilers: 3 Reasons Why Phyllis and Jack Reunite When New Y&R Episodes Return 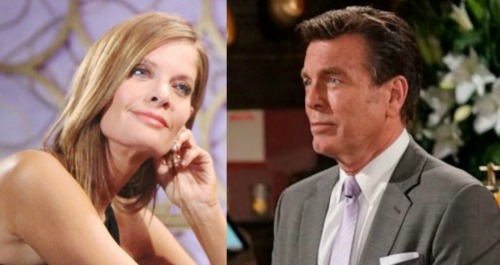 The Young and the Restless spoilers document that Phyllis Summers (Michelle Stafford) projects as reuniting with Jack Abbott (Peter Bergman) if three linked factors play out in Genoa City, Wisconsin. As Y&R fans recall, Phyllis has recently reunited with Nick Newman (Joshua Morrow), but they’ve just begun to officially see each other again.

Meanwhile, Jack isn’t pursing romance this summer. He and his siblings are fully focused on Dina Mergeron’s (Marla Adams) deteriorating condition, which is why they moved her back into the family mansion.

Issues connected to Phyllis and Jack’s lives, along with one other factor can allow them to reunite when new episodes begin to air, hopefully later this summer.

Young And The Restless Spoilers – Phyllis & Nick Reboot Is Fragile

Phyllis and Nick definitely have an enduring connection. Their child, Summer Newman (Hunter King), will keep Phick forever bound. But there’s no discounting the seeming reboot, as Stafford and Morrow’s characters still have chemistry.

As longtime Y&R fans recall, Phyllis and Nick were married twice. Those marriages were sandwiched between Phyllis’ nuptials to Jack. Of course, Phyllis first husband was Danny Romalotti (Michael Damian), who she was married to multiple times in the 1990’s.

So, the Phick reboot needs to end in some fashion in order for Phyllis to be free. Intriguingly, Bergman’s character offered his blessing, which, at that time, was a wink to how his feelings have evolved since being betrayed many years ago. That may be eventually be seen as a foreshadowing in retrospect.

Adams’ performances in the Dina arc are widely considered to be outstanding. Her colleagues, which includes Bergman, have also delivered superb work.

When last they were seen, the Abbott’s were preparing for Dina’s life play out. As assumption of many months for this to happen would allow the story to be written to a respectful end.

Along with the above, Jack will surely seek consolation from trusted sources beyond family members. Who better than Phyllis? She and the late Luann Volien Abbott (Elizabeth Sung) are his arguable greatest loves.

Phack’s two marriages didn’t end well. As previously referenced, Jack was hurt badly. However, he and Phyllis are currently in a good space and have reestablished trust.

The Dina related pressures are ones that Phyllis is attuned to. She can surely offer compassionate to Jack at any time and also be in a position to turn to him if Phick doesn’t go smoothly.

Back to Phack again when new Y&R episodes return? It makes sense for at least three reasons.