BY Heather Hughes on May 11, 2020 | Comments: Leave Comments
Related : Soap Opera, Spoiler, Television, The Young and the Restless 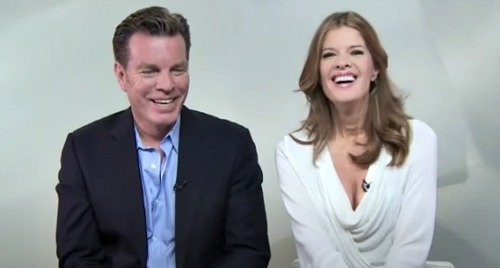 The Young and the Restless (Y&R) spoilers reveal that Jack Abbott (Peter Bergman) recently reflected on his favorite storyline. Jack’s been part of many hot plots over the years, so it’s a big deal that Bergman was even able to pick the one he liked best! However, there was indeed one that stood out to this Y&R star – and it involves a particular love interest.

In a recent issue of Soap Opera Digest, Bergman admitted it was Jack’s love story with Phyllis Summers (Michelle Stafford) that he enjoyed most. “My favorite would probably be Jack and Phyllis, two of the least likely characters to find each other, falling in love,” Bergman said. “No one expected it … and everyone loved it. Some really fun days with Michelle Stafford.”

It sounds like Bergman was a huge fan of “Phack” and so are tons of Young and the Restless viewers. Of course, Phyllis recently reunited with Nick Newman (Joshua Morrow), but “Phick” is doomed to repeat history. Sooner or later, Nick and Phyllis always find a way to crash and burn. That could leave Phyllis a very single lady down the road.

Although Jack and Jill Abbott (Jess Walton) were reconnecting a bit before new episodes ran out, anything can happen down the road. The Young and the Restless may decide to steer away from a Jack and Jill reboot.

Regardless, another pairing is always just around the corner on soaps! Jack is one of GC’s most eligible bachelors for now, so “Phack” fans will hold out hope.

Since Phyllis and Jack’s love story was Bergman’s favorite, it’s safe to say he’d be on board with revisiting it. It’d be interesting to see how long Jack and Phyllis could make it work this time. Soapy obstacles tend to make lasting relationships difficult, but Phyllis and Jack might manage to keep it together for a while.

This would also be an intriguing development for Kyle Abbott (Michael Mealor) and Summer Newman (Hunter King). Kyle’s dad would be getting back together with Summer’s mom, which would be a little weird for them.

At the same time, Summer and Kyle might think their parents would be good for each other. Those Abbott men are always drawn to those Newman women!

There’d be some intriguing places to go with a Phyllis and Jack reunion. Bergman seems to be rooting for “Phack,” but what about you? Do you want to see Phyllis and Jack as a couple again? As other Y&R news becomes available, we’ll bring you updates.