The Young and the Restless Spoilers: Jack’s Search For Love Brings Him Back To Gloria? 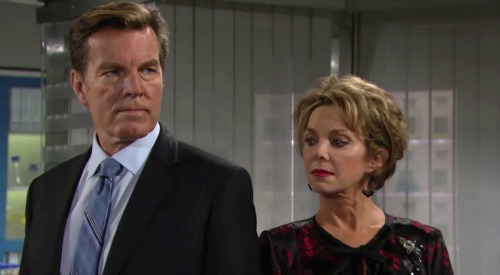 The Young and the Restless spoilers document that Gloria Abbott (Judith Chapman) was once married to John Abbott (Jerry Douglas). While the Abbott family was totally against that union, both characters loved each other deeply.

Digitally skipping to the late 2010’s, Jack Abbott (Peter Bergman) was involved with Gloria himself. She was hoping for more than what he offered though, as Jack simply saw Chapman’s character as someone to have fun with.

The irrepressible Chapman hasn’t been seen on Y&R since 2018, which was after Jack blew her off. The then Jabot secretary was often seen outside of Jack’s Chief Executive Officer’s office. Then, one day, she was no longer there.

Devoted fans knew that Khloe’s impending arrival would probably spark Gloria’s return, or at least that’s what fans of this truly great actor were hoping. Thankfully those desires have been answered, with Gloria set to return in October per CDL.

Chloe Mitchell (Elizabeth Hendrickson) and Gloria’s son, Kevin Fisher (Greg Rikaart), were expecting the arrival of their second child when viewers last saw them in the spring, which was prior to the production shutdown.

A recent scene teaser implied that the baby would soon be born, with Gloria’s other son, Michael Baldwin (Christian Le Blanc), and her daughter-in-law, Lauren Fenmore (Tracey Bregman), eagerly anticipating the family addition.

Phyllis Summers (Michelle Stafford) tried to tell Jack that his interpretation of Dina Mergeron’s (Marla Adams) message likely wasn’t what he thought it was. So, he seemed to veer somewhat away from a belief that Dina wanted him to know that love was something he should be searching for.

Dina’s worsening condition could cause him to loose his last remaining parent at any point. A clear link in storyline time back to when Jack, his sisters, and Gloria lost John could easily be made. With it Chapman’s character can offer consolation to Jack and a new romantic connection could ignite.

Chapman is a gifted actor, who can play serious, or comedic with equal skill apparent. Gloria’s interplay with her most recent husband, Jeffrey Bardwell (Ted Shackelford), who is Chelsea Lawson’s (Melissa Claire Egan) father, was always fantastic.

The pet nicknames they used for each other, with Jeffrey’s for Gloria being Glo Worm, their banter, and various adventures offered compelling comic relief. So, it would be great to see Shackelford return to the cast as well.

Jeffrey hasn’t been seen since 2016, and the actor’s last credit (an episode of NCIS) aired in 2017. But at least Y&R fans are preparing for Gloria’s revival, which is sure to deliver great entertainment.