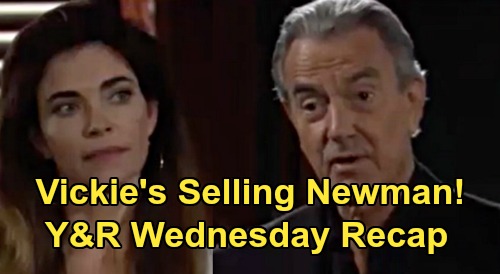 The Young and the Restless spoilers recap for Wednesday, August 19, tease that Chelsea Lawson (Melissa Claire Egan) will pay Sharon Newman (Sharon Case) a visit. Chelsea will tell Sharon that Adam Newman (Mark Grossman) won’t be seeking therapy from Sharon after all.

Sharon will think that’s a mistake, since the traumatic memories could return anyway, but Chelsea will insist that she knows Adam best and that the past needs to stay buried.

At Adam’s penthouse, Victor Newman (Eric Braeden) will check in on his son. Victor will advocate for Adam to leave the past where it is and just move on, but Adam will say that’s not going to be possible since Victoria Newman (Amelia Heinle) and Nick Newman (Joshua Morrow) know the truth.

Meanwhile, Victoria will meet with Billy Abbott (Jason Thompson) at Chancellor Communications. Victoria and Billy will discuss the big story that she told him about a while ago.

Billy will hear all about Victoria’s ideas and he’ll think that it’s all a big risk, but Victoria will say that it would mean that he’d win, and that she’s confident he’ll say yes. Later, Billy will run the plan by Amanda Sinclair (Mishael Morgan), telling Amanda that he thinks they should definitely be in on it.

At the Grand Phoenix, Nick and Phyllis Summers (Michelle Stafford) will be enjoying breakfast in bed when Nick gets a call about the upcoming press conference. It will be “no comment” from Nick, and he’ll rush off to go to Newman Enterprises to see what’s going down.

At the Abbott mansion, Jack Abbott (Peter Bergman) and Traci Abbott (Beth Maitland) will be busy discussing and looking for the home movies that Dina Mergeron (Marla Adams) recently referenced.

After some talk about Theo Vanderway (Tyler Johnson) and Victoria’s upcoming business move and press conference, Jack will get a call from Victoria saying that everything is on track.

Afterwards, Abby Newman (Melissa Ordway) will show up and help Traci by suggesting that Dina’s movies might be in Paris. Traci will arrange for the boxes to be sent to Genoa City.

Over at Newman Enterprises, Nikki will speak with Victoria about the importance of not revealing any family secrets at the press conference. Victoria and Nikki will argue, but Victoria will say that she’s not changing her mind and that she’s made the best decision for the family and for Newman.

Nikki will then head to the Grand Phoenix, where she’ll find Nick. Nikki will be worried that Victoria is going to make some sort of announcement about Adam’s past and the fact that he killed AJ Montalvo as a boy.

Nick will doubt that Victoria would give that up at a press conference, and he and Nikki will watch the press conference online, while Sharon and Chelsea watch from Sharon’s place.

Victoria’s press conference will start with Victoria saying that she’s back as CEO of Newman Enterprises permanently. After making a comment about leadership and accountability, Adam (who will be watching from his penthouse with Victor) will think that Victoria’s about to expose his childhood secret.

But Victoria will go on, and her big announcement will be that she’s going to streamline Newman’s operations.

Back at Sharon’s place, Chelsea will be grateful that Victoria didn’t mention Adam and his secret. Through her conversation with Sharon, Sharon will let it slip that she’s recently had surgery for breast cancer.

Chelsea will be sorry to hear that, and Sharon will say that she’s willing to help Adam despite what she’s going through – it’s that important.

Later, at Newman Enterprises, Victor will talk with Victoria about her decision to sell off parts of the company to the Abbotts. Victoria will tell her father that he should focus his attention on helping Adam with his issues.

Victoria and will start arguing, and Nikki will break up the escalating discussion. Victoria will step out, and Victor and Nikki will be glad that Victoria didn’t expose Adam at the press conference.

It sounds like a lot of Y&R drama is heating up for Wednesday’s episode, so stay tuned! We’ll give you updates as Y&R news comes in. Remember, CDL is your go-to place for all the latest Young and the Restless spoilers, updates, and news.