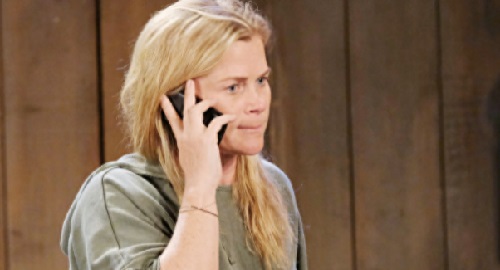 First on Wednesday’s DOOL episode, Lucas Horton (Bryan Dattilo) will keep his promise by coming to Sami’s rescue. It looks like Sami may get the upper hand on Jason (Noel Gugliemi) again first, but Lucas will pitch in once this guard is tied up.

Days spoilers say Lucas will grill Jason in hopes of finding out who’s behind Sami’s kidnapping plot. Jason may not be willing to talk, but at least Sami will be able to walk out of that cabin a free woman.

Meanwhile, Allie will fret over her mom’s situation and get some support from Tripp Johnson (Lucas Adams). It won’t be long until Lucas brings Sami home for a heartfelt mother-daughter reunion, so Allie will certainly be relieved to see Sami’s back safe and sound.

Other Days spoilers say Rafe will drop by the DiMera mansion, where he’ll put Chad DiMera (Billy Flynn) and Abigail DiMera (Marci Miller) through an interrogation. Since Chad was one of the last people to see Kristen before her prison transport, Rafe may wonder if he had something to do with his sister’s escape.

Of course, Chad will assure Rafe that he had no interest in breaking Kristen out of jail. He doesn’t agree with Kristen’s choices and seems done with all her drama by now. Abigail will back Chad up when it comes to shutting down any of Rafe’s suspicions, but Rafe may ask about EJ next.

Chad already admitted to Abigail that EJ would have the most motive to help, but he was stuck at the office all day with his brother. Rafe may consider the possibility that EJ hired some help, but Chad may argue that EJ seemed pretty focus on making him miserable on the job.

Across town, EJ will track Ava down and admit he knows she was Kristen’s accomplice. DOOL fans know Gwen Rizczech (Emily O’Brien) helped as well, but it doesn’t look like EJ will be in the loop on that just yet.

Regardless, EJ may point out he has leverage on Ava and advise her to keep that in mind. For the time being, EJ won’t want to spill the beans. That could break up Ava’s relationship with Rafe and send him straight to Nicole Walker’s (Arianne Zucker) door, so EJ will be willing to let Ava’s secret stay buried and preserve his own shot with Nicole.

Finally, Paulina Price (Jackée Harry) will realize she’s got something in common with Kate Roberts (Lauren Koslow). After Paulina opens up about her abusive history, Kate will confess to dealing with some abuse in her past, too. She’ll understand why Paulina was scared into making some difficult choices, so it sounds like a real friendship could bloom here.