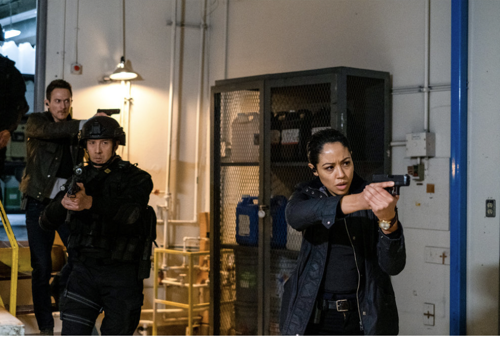 Tonight on NBC their new Sci-Fi drama Debris airs with an all-new Monday, April 12, 2021, episode and we have your Debris recap below. On tonight’s Debris Season 1, episode 7 called, “You Can Call Her Caroline”,  as per the NBC synopsis, “Bryan and Finola head to Maine to pursue an INFLUX lead, but they discover a volatile situation where a young girl has lost her father to debris; meanwhile, Maddox learns Anson’s secrets.”

In tonight’s Debris episode, we see a man and a woman near waiting for a ferry, an announcement comes on the intercom and says the ferry is fifteen minutes out. A man is sitting in a chair waiting, when everyone around him freezes, one woman, Linda Curtis, gets up, she takes the duffel bag he is holding and the man shoots himself in the head. Linda walks away and doesn’t turn around.

Bryan is in the office, he is given a lead, Anson Ash, Maddox tells him that British intelligence says he went awol six years ago. He was a decorated soldier and then he became an issue for them. Bryan asks Maddox if he has any more clarity on INFLUX, where it started. Maddox says it is an anti-government ideology movement organized to dismantle the governments’ control of the debris. They don’t know where they started and don’t know where the dark money is coming from. Maddox tells Bryan that he needs him to go to Main and investigate quietly, they need the lights off so he can tell how dark this is. Bryan tells him that he thinks that Finola and MI6 know that her father is alive, he has been spending a lot of time with her lately and she is acting differently, he wanted him to be aware.

Finola is with Bryan, she tells him that she has been briefed. Then she asks him if there is any more intel about her father, he says no. Byan tells her that he told Maddox she knows her father is alive, he needed to know, he didn’t want him to be vulnerable.

Finola and Bryan arrive in Maine, they find out that the calls made to Anson Ash’s phone were made from a burner phone purchased by Liam Packard, he killed himself. They see footage of him killing himself and everyone around him, except for Linda, looks like they are in a trance.

They found Linda on the highway, no bag and she doesn’t remember anything that happened. They look at Liam’s body, Bryan says he was definitely around some debris, there is a magnetic field around his body. Finola sees that he has been in some small-time trouble since he was fifteen years old, he doesn’t even have a passport. Bryan says he and Anson Ash were trading calls, there has to be a reason. They decide to go check out Liam’s house and find his brother, Luke Packard there. He tells them they are a lot of power for a dead man.

Then he asks if this is about the UFO. Inside the house, Luke tells them that Liam found some small pieces of strange metal behind the property a few weeks ago. There is a group on the internet that tracks this thing, Liam says this was a part of it. He was going to sell it to people he met online, on the dark web. He was offered fifty thousand dollars, he left that morning to do the trade. Liam’s daughter, Caroline walks in and Luke tells her to give them a moment. Luke goes on to say that his brother has been acting weird, intense and he has only seen that with guys in Afghanistan.

Bryan asks if they could look at his laptop and the marsh where his brother found the pieces. Finola thinks the debris maybe took control of them all. Luke asks Finola if she has experience telling children about a loss, she says yes, it is not easy, just focus on being there for her, that is what really matters.

Bryan and Finola leave, she is looking at Liam’s computer and there are a lot of articles he was looking at regarding conspiracy theories. Finola remembers that they didn’t search the marsh, how could they have done that. They return and Finola tells him that she doesn’t want to be there, she doesn’t want them to be there, she turns around and heads back to the car. Bryan follows her to the car, she says it was like it spoke to her, but different than she experienced in Kansas, like a whisper in her ear.

Anson gets a visit by Maddox, they hook him up to a machine. Maddox says he is a soldier and he respects that, he must have a very strong spirit. He says some of the information he gets from terrorists he has shared with the UK. He gives Anson a shot of Novocaine in the forehead. Then he takes a knife and cuts his scalp and they insert something. Maddox starts asking him questions. He starts with a church and asks if it is still there, he always wanted to do a painting of it. Maddox tells him to think of the church, the way the bell sounds, and the vibration. Then he tells him to think about George Jones.

The next morning Bryan and Finola are having breakfast, he tells her the last number that Liam dialed before he died was not to INFLUX, his ex-wife. Ten minutes before he shot himself. They head to his ex-wives’ house, she says he was upset and he said if something happened to him to go get their daughter. She says she won custody, but she didn’t go get her daughter when Liam asked because she belongs there.

We see Liam’s daughter, Caroline, she goes down to the marsh and sits in the water, and just stares. Under the water, debris starts moving around. Then we see her enter a door to a shed, with a bag over her shoulder.

Bryan and Finola are back, they have brought backup. Finola goes inside and sees Caroline watching TV. Bryan asks why he didn’t go to a hotel as they told him to, he says he doesn’t remember that. Finola hears a noise, then she sees Caroline outside, she follows her. A team is going into the marsh, Finola tells her that she thinks that she knows what they are looking for. Caroline tells her that she has to leave or she will be hurt. Finola tells her that she is there to help her now and she doesn’t have to be strong all alone. Meanwhile, Bryan tells Luke that they are worried about Caroline. Bryan sees Liam’s blue duffle bag, while Caroline is telling Finola that she thinks Luke hurt her father.

Luke tells Bryan that he doesn’t want to hurt Caroline, but she needs to find more debris. Luke tells Bryan to go find his partner. Outside, Finola tells Bryan that Luke is controlling the debris. They leave and Luke comes out the house, he tells Caroline that she made him waste too much on them and she needs more now. He knows that she has been hiding what she found, he demands to know where it is. He reads her mind and says, good girl. Luke goes into the shed and finds all the debris that Caroline collected.

Bryan and Finola have left and back at the base. When they are asked about Caroline, Bryan says it is all good, she is with her uncle, she belongs there. Finola turns to Bryan and asks him how they got there.

Luke cuts the wire to a fence and gets in the base. A plane crashes, Finola sees Luke and tells him to stop, he tells her that she can’t shoot him. Officers arrive and one points his gun at Luke, but then turns around and shoots his partner. Bryan rushes up, he pulls out his gun and Luke makes him point his gun to his own head. Luke tells him to pull the trigger. Luke then takes out all the debris and throws it over the squad car, one-piece jump up and loges in Luke’s head. Then we see Caroline, she is there, she did it because Luke was going to hurt Finola. Caroline is reunited with her mother. Finola tells Caroline that she was the strongest and she saved their lives.

Finola’s sister calls her, she says she is on a downward spiral and needs her home. Finola tells her to call her sponsor. Her sister says she wants to go to Michelle’s country house with her. Finola says she will do her best to get back to see her. Then we see her sister pass the phone to a woman. Finola tells Bryan that she just got the strangest call from her sister. Bryan tells her they found her father.

Bryan gets a call from Maddox, he just finished interrogating Anson Ash and needs them back right now to prep for a raid.