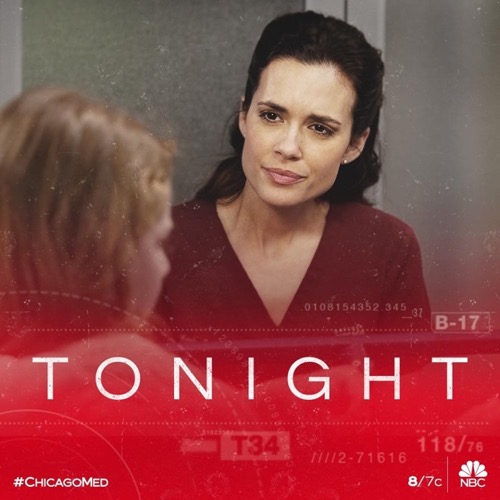 Tonight on NBC their medical drama Chicago Med airs with an all-new Wednesday, May 8, 2019, episode and we have your Chicago Med recap below. On tonight’s Chicago Med season 4 episode 20 called, “More Harm Than Good,” as per the NBC synopsis, “Dr. Charles and Dr. Manning disagree on how to handle a patient who they discover is poisoning herself. Dr. Rhodes throws some serious accusations at Dr. Bekker. Dr. Halstead has suspicions about Natalie’s new boyfriend and Dr. Choi tends to Bernie.”

Will meets Natalie’s boyfriend Phillip is helping watch Owen. Natalie introduces them. It is very uncomfortable. Several individuals are rushed in with strange rashes and a burning sensation in their veins. They were found at a run-down house. Dan asks one of the patients what drug she took but she won’t answer. He offers her morphine for the pain but she isn’t budging.

Connor talks to Natalie’s friend Phillip whose daughter he is treating. He sees his father down the hall getting upset. Connor rushes to him and takes him in.

Will and Natalie talk at work. He is surprised she let Phillip meet Owen already. Their conversations gets heated. She doesn’t have to defend her parenting choices to him.

Will meets with a Russian man visiting his cousin who talks for him because they cannot find a translator. The Russian man fell in the shower. When Will mentions that the man appears okay with internal damage the cousin is thrilled. He is receiving a kidney from him. The visiting cousin doesn’t look happy about donating which piques Will’s interests.

One of the patients brought in for drug use who denied the pain or help dies. Meanwhile, Will watches as the man and his supposed cousin fail to supply important information to patient registration.

Ethan assesses a married man and new father who has a distended abdomen. Will gets upset after looking at his father’s scans. Natalie and Dan finally figure out that their surviving drug patient has actually been exposed to a toxin in the abandoned house they were squatting in. They tell Meadow what they have learned and given her meds. She takes them. Dan is curious about why she accepted help now.

Will talks to the cousin who is donating his kidney. The cousin comments that he has to do it. Will questions whether he is being forced. Meanwhile, Natalie and Dan get called. Meadow is getting worse. They discover the pills in her bed. She never took them. She shares that she is supposed to die.

Meadow begins rambling about global warming and the earth. Natalie and Dan start to dig into why she is saying these things. They discover she is in a cult, one that believes if they rid themselves of the earth they can save it. Dan thinks they need to petition the court to deem her incompetent, getting her the help she needs.

Will’s patients’ surgeon arrive. He wants to perform the kidney transplant today at the hospital. Will asks Meg to stall while he tries to figure out of the cousin is being forced into donating his kidney.

Connor questions Ava and Isidore on his father’s surgery. Isidore is insulted and shares that Ava performer perfectly. Ethan tells his patient, Emily’s boyfriend, he will need surgery. He becomes upset that Emily has to put her apartment hunt on hold. It isn’t fair to her and the baby.

Will shares his thoughts on the donor with Sharon who doesn’t see anything wrong. Natalie tries to reason with Meadow whose hair has started falling out. Natalie takes it upon herself to deem Meadow incompetent. She asks the nurses to restrain her and place an NG tube to administer meds.

Will questions the donor one more time alone who tells him Brandon is his cousin and he needs to help his family. He shows Will a photo of the two together when they were young. Brandon comes in. The two talk about their younger years and memories. Will believes he may have made a mistake.

Ethan talks to Emily. Bernie’s surgery is going well. She is angry about the things he said before Bernie went to surgery.

Dan confronts Natalie on her decision, telling her she is breaking the law. He plans to take out the tube.

Dan takes out the tube and apologizes to Meadow. He offers her sleeping pills. She accepts. Dan tells Natalie and the nurse that after she takes the pills they can then legally place the NG tune and give meds because she will be unable to communicate.

Connor apologizes to Ava for questioning her work. She becomes angry and asks him why he is doing all of this to her. All the things he has said not only now but before. She walks away.

Ethan visits Bernie is his room. He apologizes to Bernie and Emily and offers his support. Bernie asks to speak to Ethan alone. He tells Ethan he was right, he needs to step it up. He asks Ethan for a prescription for erectile dysfunction. Ethan feels awkward.

Natalie apologizes Dan for stepping out of line. He asks her if she is okay, this isn’t the first time.

Will runs into Phillip and apologizes for his awkwardness previously. Will learns that Phillip was just teasing Owen when he said he owned a horse ranch. He thought Owen would get a kick out of it, making Will wonder what type of man he is.