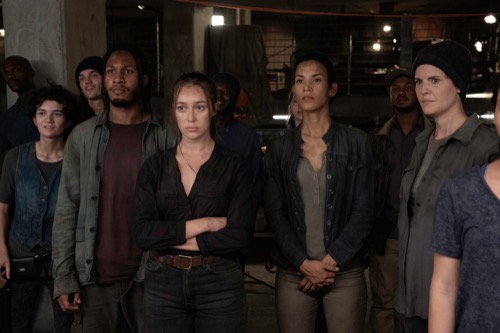 On AMC tonight Fear The Walking Dead (FTWD) airs with an all-new Sunday, May 2, 2021, episode and we have your Fear The Walking Dead Recap below! On tonight’s FTWD season 6 episode 11 called, “The Holding,” as per the AMC synopsis, “An infiltration turns rescue mission as members of the group dig deeper into an underground community.”

In tonight’s episode of The Walking Dead, the episode begins with us seeing an underground parking garage converted into a place that has everything you need in a post-apocalyptic world. There are water, electricity, fresh chickens and lots of produce. Sabrina is taking some of the prepared food and walking out of the kitchen, she stops to look at a walker tired to a makeshift tree, Riley tells her to hurry along they have new recruits arriving. Sabrina says that she was trying to see like Teddy, but she couldn’t.

Sabrina asks who the recruits are, she is told they are survivors that are in rough shape according to Teddy. Riley greets Alicia, Wes, Al, Luciana, and others, they are welcomed to The Holding. We see a tree painted on the wall, it reads, “the end is the beginning.”

Riley is with Alicia in a room, he is recording and she asks why, he says for Teddy and he is very much alive. He tells her that she is lucky they found them when they did. She wants her weapons back, he says none are allowed in The Holding. Then we see the others being interviewed as well. Luciana says she was in a place like this before, Riley says there is no place like this. We see the walkers, they put them in a machine to break them down. They make meals to feed the chickens. Al looks around and says it is impressive, but it almost feels like they are preparing for something.

Riley says they are closing up the doors soon for good. This is new, this is where life begins again. Al tries to ask more questions. Riley takes Alicia to the walker that is tied to the tree, he asks her what she sees. She says she sees a walker that should be on the ground. Riley says nobody gets it on the first try. He tells her that Teddy will be able to look into her eyes and see the truth. Riley asks Luciana the same thing, she tells him that it seems like a trick. Then, Al, and tells her that she keeps asking questions with questions. Despite having their guard up, Riley is able to get the group to open up about old wounds.

It is time for the group to meet Teddy, the elevator opens and Teddy is not there, but Derek is, Wes’ brother. Wes tells him that he thought he was torn to pieces. Derek says he is sorry, he got cornered, he locked himself in a shed and he passed out, he thought that was it. When he woke up, he was here. Derek says he looked for him and his bike.

Wes tells his group that maybe this group is not as bad as they think they are, maybe Virginia made them paranoid. Derek returns to have dinner with them but he sees Riley walk away from the table and says he has to go topside for a bit. After dinner, Wes and Al are snooping around, when Wes finds some papers stuck in an old empty can of condensed milk. There are maps, and one of Tanktown, confirms to Al that they did everything they could to take down Tanktown and other settlements too. Al tells him she is sorry. Wes says Derek thinks these people are good, but they are not, they have to get him out of there.

Derek is painting a wall, Wes walks up and says they set up the attacks on those places. Derek says he will not understand he is not ready. Derek says he can see, and he will as well when he meets Teddy. Wes tells Derek that he was at the oilfields and he was hit with shrapnel, he almost died. Derek says everyone has to go up there for them to thrive down here. Wes is upset, he says good people, innocent people died because of him. Wes tells him this is not him, he asks him to go with them. Derek says up there is how they used to live, down here is how it is going to be. Wes mentions Morgan’s name, Derek asks about Virginia, Wes says she is dead and Morgan helped them take her down. Wes says he is his brother, he has to trust him, he wants a new beginning, they both can, he just has to go with him. Derek says if they catch him trying to leave, they will kill him, and all of them. Wes says, then let’s not get caught.

They are in an elevator, leaving, Alicia hits Derek with a gun and says let’s go, she doesn’t trust him. As Alicia goes to leave the elevator, Riley is there with a bunch of men and tells her she is going nowhere.

They are taken into a room where there is embalming fluid. They are told they won’t decay, they won’t be a part of the earth or their new beginning. And, it doesn’t need to be like this, all they have to do is tell them where Morgan is. They choose to do Wes first, Derek walks into the room and tells him to give them the information they want. Derek definitely drank the Kool-Aid, he is loving this place and never leaves. Derek brings Wes to the walker tied to the tree, he asks him what he sees. Wes says he had people at the oil fields, did he know he was there.

Derek says people are people. Wes says he sees someone who is walking even though he is dead inside. Wes grabs his brother’s gun, they get into a struggle and fall over near the walker who takes a big chunk out of Derek’s back. Wes is in shock, his brother dies in front of him, he tells him that he loves him, and then he goes and shoots him in the head. Riley hears the gun and goes to leave but Wes is there and he manages to grab Riley and he tells the other men to back away as he is holding his gun on him. They manage to get out and lock the door, Al says they have a few minutes tops. They realize where they are, in a room with walkers hung up, they are all embalmed. Their jaws are wired shut, they just have to be fast and make it through them. Alicia decides to stay behind, embalming fluid is flammable and she torches the place while everyone else escapes.

Al is back with Morgan, she tells him Alicia may have got out, she doesn’t know, all they could see was the fire. Luciana says they are planning something big, enough to be down there a long time. Lucian mentions they knew Morgan, he doesn’t know them and doesn’t know why they would want him. Dakota wants to help, Morgan tells her no.

Alicia is still at The Holding, Riley comes in and asks her why he is keeping her there. Riley says our decaying bodies feed the soil, the soil, in turn, feeds the plants, out of death brings new life, for most, but not for her. Her, they are going to preserve just how she is. Riley tells a man with him to get her ready, he has a feeling Teddy would want to do this himself. The man tells her that it will be a lot easier if she cooperates, to which Alicia takes a metal object and jams it into the man’s forehead. They fight and in the end, Alicia jabs him in the neck and kills him.

Riley and Teddy come into the room, he tells Riley to give them a moment. Alicia calls him the king of the crazies. He tells her that if he meant her harm, they wouldn’t be having this conversation. He asks her if she sacrificed herself because she is noble, following the footsteps of her moth

er. She tells him that she doesn’t care with he thinks or what he says, just get to it. He says there is a lot they can learn from each other. She says she is not buying the crap that he is selling. He says she and her people have destroyed everything they have worked towards for years, but he believes if one lives by the sword, for every ending, there is a new beginning – he wants to save her. Alicia laughs and says she doesn’t need saving. He says he knows she doesn’t believe in them yet, but she will, he has been looking for someone like her for a long, long time.