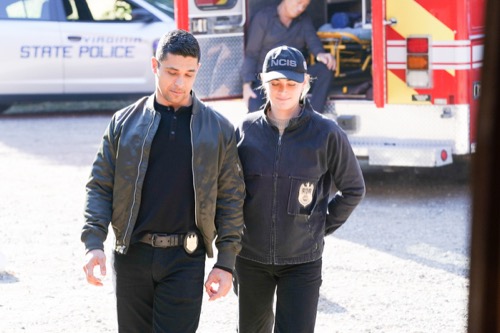 Tonight on CBS NCIS returns with an all-new Tuesday, April 27, 2021, season 18 episode 12 called, “Sangre” and we have your weekly NCIS recap below. On tonight’s NCIS season 18 episode 12, “Watchdog,” as per the CBS synopsis, “Evidence from the stabbing of a Marine sergeant leads Torres to meet his father, who left when Torres was a child.”

It didn’t really matter in the end. Miguel convinced his son that he was just going out for a few minutes and that he would be back in time for when his son got up for the day and Torres naturally believed him. He was a child. He would’ve believed everything his loving father told him. But unfortunately, that was the last time Torres saw his father Miguel. Miguel cleared out the money they were hiding in the house and he left. And so Torres’s last memory of his father was being lied to.

Years past. Torres grew up and he came to live in the United States. He became a citizen. He even became a federal agent as an NCIS Special Agent and he and his team were called out to the murder scene of Marine Staff Sergeant Richard Larson. Larson was found stabbed to death in a property for sale. The sale was being handled by the realtor and she has never met the victim. She came in one day to check the house before an open house where she found dead in the bathroom.

The realtor, therefore, didn’t give him a key and yet Larson was found with one. The agents found a key near his remains. They also found DNA on him and it came back as a familial match to Torres. Torres asked Kaisey if she was sure. She told him she was and she added how the familial match belonged to a male relative.

Kaisey couldn’t add anything else because the DNA was too corrupted. Torres knew that it couldn’t be his sister or his niece because again the DNA was male and so it had to be one of his cousins. Torres had heard his father had died years ago. He immediately dismissed him when Kaisey asked about him and so he sent out feelers to see where his cousins were. He and Jimmy were checking with his extended family when the rest of the team came back with updates.

Larson had gotten a key to the house because he worked as a move to the decorator who staged the home. Another thing the team learned was that the same vehicle was driving around the neighborhood more than once during the time of the murder and so they tracked that vehicle down. And they went to where it was last seen.

Only Torres hadn’t counted on running to supposedly dead father. His father recognized him instantly and that was a surprise for someone who hasn’t seen him since he was five. Torres also really thought his father was dead. He had been shaken to see the opposite was true and it didn’t help that Miguel tried to resist arrest when McGee was about to detain him. Miguel was their chief suspect in Larson’s murder.

He acted suspiciously with McGee and so they had to arrest him. They brought him to the station. They questioned him about Larson and he denied knowing him. He even had an excuse for why his DNA was at the scene. Miguel said he visited the open house. He claims he was looking to buy a home to be closer to his family in the area and that was funny because Torres had thought he was dead for years.

Miguel explained away the DNA by claiming he used the bathroom while he was visiting the house. He also said he fought back because the first thing he saw was someone coming towards him with a gun and so, in spite of his flawed story, the team actually didn’t have any evidence to hold onto him. They still did so because technically they could for twenty-four hours. They just looked for evidence in the meantime and the first thing they did was check Miguel’s hotel room.

They found a fake room he was using as well as the real one. Torres had found the real one because Miguel had booked it in Torres’s mother’s maiden name and so they found Miguel’s guns. They found the photos of another Marine by the name of Thomas Baird and they wondered what was going on. Torres hadn’t wanted to wait for answers.

He went into the interrogation room. He confronted his father. It turned into a nasty argument and McGee had to pull Torres off of Miguel. It turns out NCIS has been ordered to stand down. They have to release Miguel because he was working with Pamela Walsh from the CIA and so Director Vance has even gotten involved in the case.

Miguel as it happens was a CIA freelance operative. He works in Southern America for them and he has for years. He’s been making a lot of money while Torres’s family was starving until the church stepped in to help. Torres is now bitter to learn his father could have helped and he never did. He’s also upset he couldn’t arrest his father. Miguel was technically one of the good guys and what he’s involved in is bigger than the fight between him and Torres.

Miguel was looking for Baird because Baird was a traitor. He himself was a CIA Officer and he was supposed to be helping them take down a known terrorist named Yusef Qassem when someone tipped off Qassem. He was able to hide detection. He also went into hiding and Baird did the same. Baird was receiving money as well as supplies from his friend in the Marines, Larson. Up until Baird killed Larson. Baird is in DC cleaning up loose ends and Miguel followed him up here.

Miguel is CIA or CIA adjacent. Neither he nor his bosses can investigate Baird on domestic soul and so Vance said his team was going to take point. He told Walsh it was either them or the FBI and she chose NCIS. Vance also had a word with Torres. He said that as a father he could never understand what Miguel did but this case has to take precedence and Vance couldn’t afford to lose another good agent.

Torres agreed to put his disagreements with his father to the side. He continued working on the case and that meant working with Miguel. Miguel later got him alone. He explained how he had been forced to leave his father because the dictator of their country has found out Miguel was working against him. Miguel said he spent a few years working with other organizations to change the world and that’s how he was contacted by the CIA.

But Miguel said once he started making money, he started donating to the church in their hometown with the wish that the money gets passed to his family and so he had been taking care of them. The dictator was eventually overruled. Torres asked Miguel why he didn’t return then and he said that he gained too many enemies thanks to his work with the CIA.

Miguel still kept tabs on his family. He visited them without them knowing and that’s how he recognized Torres as an adult. Miguel explained everything yet it wasn’t enough for Torres. He was still hurt the father he loved and trusted lied to him. He agreed to work with his dad on this case. He just wasn’t sure about afterward.

The team later found out Baird took a bank manager hostage and they tracked him back to a cabin in the words. Miguel and Torres were the ones who found Baird. They had him cornered and he told them he wasn’t the bad guy. He said he had been blamed for the failed op when it wasn’t true. He took the bank manager because the real traitor had made away with the money that was supposed to take down Qassem and only the bank manager can prove who really tipped off the terrorist.

It was Pamela Walsh. Her name was on the bank records for the stolen money and unfortunately, Miguel told his boss about them finding Baird. She followed them to the cabin. She attempted to kill everyone inside. Torres and Miguel snuck out Baird. They couldn’t do the same with the bank manager because he was killed instantly and so the two men came up with a plan.

They surprised the hitmen after them. They each took down a man and that only left Walsh. Walsh wanted to kill everyone to cover up what she did, but Miguel saw a knife lying on the ground and he told his son in Spanish to use it while he created a diversion. The diversion was getting himself shot. It gave Torres the opportunity to throw the knife and kill Walsh. And Miguel was just fine. He was wearing a bulletproof vest.

Later, the team learned that Walsh had hired Miguel without telling her bosses. She also hired two Russian assets to kill him and Baird and so Miguel saved the day. He was such a hero that Torres later offered his father an olive branch. He agreed to introduce his father to his granddaughter if he would like it and Torres even said he would pick him up from the hotel. Miguel agreed to this plan, but he bailed before Torres could get to the hotel and so Torres broke the bad news to his family and he went to go have dinner with Gibbs. If nothing else, Gibbs can be counted on.