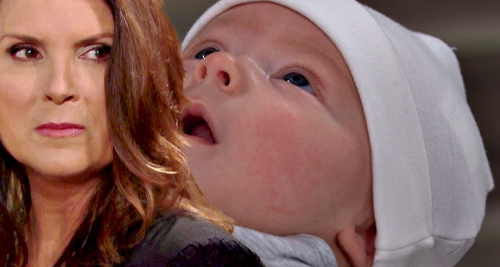 The Bold and the Beautiful spoilers reveal that Paris Buckingham (Diamond White) could make a big mistake. Sheila Carter (Kimberlin Brown) will invade John “Finn” Finnegan (Tanner Novlan) and Steffy Forrester’s (Jacqueline MacInnes Wood). Paris doesn’t know Sheila but the villain could come up with a compelling story that puts Steffy and Finn’s baby in danger.

B&B spoilers reveal that Finn admitted to Steffy that he is adopted and doesn’t know his biological parents. The adoption part of the story might be accurate but Jack was clearly hiding something.

It is teased that Jack probably knows who gave up Finn for adoption. When Sheila crashes the wedding, she will make everyone tense.

Sheila might cause a fight between Steffy and Finn as she tries to insert herself into the doctor’s life. Finn will know what everyone tells him about Sheila. However, the pull for Finn to bond with his birth mother might be irresistible.

Then, when Sheila wants to connect with Hayes Finnegan Forrester, Finn might give in. What we are counting on is for Steffy to lay down the ground rules when it comes to Hayes.

Finn might think that a mentally ill person such as Sheila just needs rest and medication. However, psychiatry is more complicated than people realize, which is part of Finn’s problem.

The Bold and the Beautiful spoilers suggest that Paris moved in with Steffy and Finn right before the wedding. She’s connected to Sheila in some way and that might be the big betrayal for Paris.

Sheila has tricked people many times before and it could happen again.

The unstable woman might create a story that convinces Paris that granny Sheila just wants to connect with her grandson. She might even get Paris to agree to secret meetings and giving her additional time with the child.

The Bold And The Beautiful Spoilers: Saving ‘SINN’ Baby

Sheila will likely know that Paris is watching her very carefully in the beginning. So, the first few visits might be absolutely perfect.

Sheila might even gush about how much Paris agreeing to secret visits means to her.

However, it is only a matter of time before Sheila snaps again. When Steffy and Finn’s baby suddenly disappears, they will look to Paris for a possible answer.

Will she tell them about “Granny” Sheila or cover up the truth? Will Paris be able to take action and save Hayes before it’s too late? Let us know what you think Sheila’s story is going to be and how it will affect Finn.