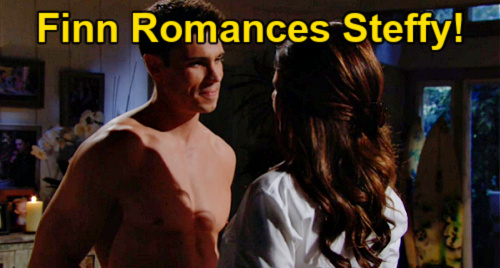 Finn talked to his parents about Liam Spencer (Scott Clifton). He also explained that he wanted to make sure Steffy and the children have a drama-free home.

On Wednesday, it will be the night before Steffy and Finn’s wedding. The couple will be excited to become husband and wife. Finn will spend the evening pulling out all the stops to romance Steffy.

They will have an amazing night but the wedding day will go as smoothly. There will be some surprises that will leave their heads spinning.

The Bold and the Beautiful spoilers for Wednesday reveal that Quinn won’t be invited to the wedding. Even though she didn’t get along with some of her in-laws, that was still her family for many years.

So, it will make Quinn a bit sad to be excluded. However, she isn’t the only one that wasn’t invited to Steffy and Finn’s ceremony.

The Bold and the Beautiful Spoilers: Carter Walton Shunned

Carter also won’t be going to the wedding. He usually officiates all of the ceremonies for the Forrester family. Since his fling with Quinn was discovered, he has been an outcast. He considered the Forresters to be his family and they usually treated him like one of their own.

So, to suddenly not be allowed at major family events will be hurtful for him. As Carter wraps his head around how his life changed so suddenly, he will distract himself by focusing on Quinn.

“Quarter” is still not supposed to be seeing each other. In order to keep his job at Forrester Creations, Carter had to agree to Eric Forrester’s (John McCook) rules.

However, he is starting to question if it’s even worth it. He will have to decide which is more important to him.

Will he stay focused on his career and give up the woman he’s falling for? Or will he choose to be with Quinn no matter what the consequences are?