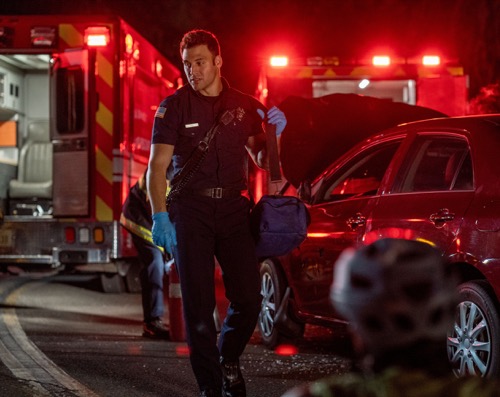 Tonight on FOX their #1 drama 9-1-1 airs with an all-new Monday, October 10, 2022, season 6 episode 4, “Animal Instincts” and we have your 9-1-1 recap below. In tonight’s 9-1-1 season 6 episode 4 as per the FOX synopsis, “The 118 race to the rescue when a birdwatcher is trapped under a tree. Chimney is in for a wild ride when he tends to be a drunk driver; Maddie helps a mother and her young daughter when an abusive father shows up at their house.

Eddie catches Christopher in a lie; Buck begins a year of “yes to possibilities” and immediately receives an interesting proposal from a former roommate.”

A bird watcher had a tree fall on him. He was standing by a fallen tree and he appreciated its roots when the wind caused the tree to stand back upright. It fell on the bird watcher. He was trapped under it. The park ranger that had tried to warn him had also been the one to call it in. The dispatcher sent the 118. Hen was still interim captain at the time and so she was leading the team on this one. She and the others managed to somehow get the tree off the birdwatcher. They rushed him to the hospital via helicopter. His sister went with him. She had gotten asked out by the park ranger following her brother’s accident and she was so skeeved out that she couldn’t wait to get on the helicopter away from the guy.

Afterward, the park ranger told the firefighters that he thought it was his chance once he realized that her brother was actually her brother and not her boyfriend. But Buck told him he has bad instincts. They returned to the firehouse only to find Bobby there. Bobby returned from leave early. He had gotten a call from Hen’s wife, Karen. Karen told Bobby that Hen hasn’t been doing too well. The additional tasks of being captain, even for such a short time, have thrown Hen into a tailspin. She was doing badly at med school. She failed her neurology test and she’ll have to repeat that course next semester.

Hen was killing it as captain. The team respects her. They would follow her anywhere and so it was just her private life that was suffering. She failed at school. She forgot about her son’s robotics meeting. She even forgot to pick her son up at all. Hen got lucky that she has a partner who stepped in to help, but Karen called Bobby for a reason. The two talked. They both decided that Hen needs a break. So, Bobby decided to order Hen to take a few days off. Hen didn’t like that idea. She tried to resist it only Bobby wasn’t taking any excuses. Hen took leave. She spent a day at her house alone with her wife at work and her son with his friends and she craved her time at the station.

Hen tried to sneak in. Bobby caught her. He asked her why she had come in and she explained she was bored with nothing to do. But Bobby didn’t care. He told her to go home and stay home. He and the others later responded to a car accident. Both drivers had gotten pretty banged up. It was also clear that one of them had been drinking and so Chimney went into the drunk driver’s car to administer treatment, but then the guy pulled off. He pulled off with Chimney still inside the car. The drunk driver was trying to escape DUI charges when he instead racked up even more charges like kidnapping as well as fleeing from an accident.

Surprisingly, it was Buck who got the guy to stop. Buck borrowed a bicycle and chased down the drunk driver. He got in front of the car. The drunk driver was so afraid of hitting him that he stopped and he allowed the cops to arrest him. As for Buck, he pulled off a dangerous move. Something he wouldn’t normally do nowadays. Not since he began working on himself and so there was a reason he was acting recklessly. Buck recently got invited to dinner with his old roommate. He and the roommate had lost touch for a brief time. They were only now just reconnecting and a lot has happened for the both of them.

It turns out his friend met someone, fell in love with a nice woman, and got married. The couple has tried having kids. Nothing seemed to work so they went to a specialist. The problem lay with Buck’s buddy. He has a low sperm count. It would be impossible for him to father a child and he got in touch with Buck now because he wants Buck to become their sperm donor. Buck had told them he needed time to think about it. But Buck hasn’t quite gotten to the stage where he discusses with himself if he wants kids and having kids himself wouldn’t be like this scenario. He would be a donor, not a dad.

Buck had needed someone to talk to. He visited Hen’s place on his day off. He told her about his situation and he asked her for her opinion. Hen as always was blunt when she talked to him. She told him the most he could expect would be a Christmas card. He wasn’t going to play a part in the child’s life. He was never going to have a say. Did he really want to sign off on that or was he just too kind to say no? Buck and Hen got to drinking as they pondered everything. They thought it was safe to drink because it was their day off and so they were surprised when Bobby ended up calling. Bobby had needed Hen’s expertise.

The firefighters responded to an OD where they found out the victim was in fact a dog. The dog ingested some opioids lying on the floor. He was the pet of a sorority house and they were throwing a huge party. Which got busted up the moment Bobby asked what the dog ingested. But with Hen’s advice, they were able to treat the dog. They even got him back on his feet. They also took the dog with them when they left so that they could take him to the vet and called protection services on its owner. The last part was something Bobby made up on the spot just so the sorority house didn’t rebel against his decision of removing the dog. And Bobby later adopted the dog.

A happy surprise for his wife, Athena.

But Maddie went through her own journey. A little girl called 911 because her abuser’s father had found her and her mother and so Maddie talked the little girl through the attack. And she also checked up on both the daughter and mother after the father was arrested. Maddie made sure they got an immigration attorney and she reassured them that they would be safe.

As for Buck, he said yes to being a sperm donor.