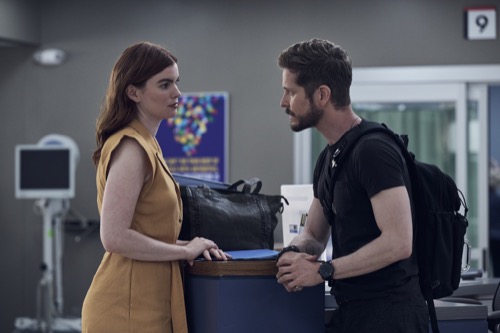 Tonight on FOX their new medical drama The Resident airs with an all-new Tuesday, September 20, 2022, episode and we have your The Resident recap below. In tonight’s The Resident season 6 episode 1, “Two Hearts”  as per the FOX synopsis, “When Padma’s pregnancy takes a dangerous turn, the doctors come together to find a solution and turn to Ian to perform a miracle.

Meanwhile, Conrad makes a decision regarding his love life and Devon leads his own clinical trials at Chastain.”

The Resident season 5 episode 20 air from 8 PM – 9 PM ET on FOX. Make sure to bookmark this spot and come back for our The Resident recap! While you wait for the recap make sure to check out all our television recaps, news, spoilers & more!

GiGi wakes from a bad dream. She yells out for Conrad who decides she can sleep with him tonight. Meanwhile, AJ is out to dinner with Devon, Leela, and Padma. Padma is having twins. The whole gang has a lot to celebrate. Padma gets up to go to the bathroom and faints. They rush her to the hospital. The next morning she tells them all she is all right and not to fuss.

Conrad arrives to see a local chef, Sierra, whom he is friendly with. She has burned herself with a vat of BBQ sauce. He helps her get admitted while Cade and her dad, Dr. Ian Sullivan, learn Ian is now cancer free.

Irving, Cade, and Conrad notice Sierra has an unsteady walk and seems forgetful. They keep her to figure out what is going on. Meanwhile, Leela and AJ learn Padma has been skipping some of her appointments. She has an ultrasound. They realize one twin is smaller than the other.

Sierra has a seizure in front of Cade and Conrad. Later, they have Billy look here over. Bill is quick to ask Cade if she is needed in the ED. Cade leaves. Billy and Conrad talk about GiGi and her nightmares. She comforts him. They see that Sierra has a mass in her head after.

Kit and Devon discuss the lab and the launch of their trial. Both get bad news. The trial has been canceled. Padma’s pregnancy is also in trouble. Devon meets with AJ, Leela, Devon, and Dr. Sullivan. Padma learns her twins are using a blood supply. They need to perform a procedure using lasers to separate the vessels. Padma becomes upset. Outside the room, Ian is frank with AJ about the risks. Ian also tells them they need to travel to Orlando to get the surgery and he won’t be able to perform the surgery. They need to do it now.

Billy and Conrad tell Sierra she needs surgery for the mass in her brain. She cries. She will take the risks because she has fought hard to succeed. Meanwhile, Devon comforts Leela who is so upset about Padma and AJ, who just lost his mom.

AJ plans to travel with Padma. Kit checks in with Bell who has good news about his own prognosis and plan. He is going to get the therapy he needs. She fills him on Padma and AJ. He is upset he isn’t there. Kit tells him to hang tight. He will be home soon. Thunder and lightning break in the backdrop.

Padma is having a hard time breathing. Conrad starts her on oxygen. The rest of the gang shows up. They get her ready for transport but learn with the storm they need to do the surgery at Chastain. They get Padma into a room and start her on blood pressure meds and Lasix. They prep the OR. Conrad tells AJ he is not the surgeon for this one, he is the dad and needs to support the mom. Ian will do the surgery. He is feeling the pressure but isn’t saying so. He heads to take some of his medications in his office. Cade shows up in his office but doesn’t see anything.

During Sierra’s surgery, Billy learns that Sierra has a parasite. She is going to be all right. Meanwhile, Padma panics, and her blood pressure rises. AJ steps up and controls the cardiac drips she is on while Ian works on the babies. He manages to ablate the blood vessels and help the other troubled twin. Everyone hugs and celebrates.

The next day, Cade sees her dad take meds before going into emergency surgery. Billy and Conrad meet with Sierra. She is much better. Conrad leaves with Billy. They run into Cade. Billy is jealous but won’t say a thing. AJ sees Billy and tells her on the side she should have told Conrad how she felt. Conrad goes home and brings GiGi out on the porch to see the moon, hear the owls and see the stars to make her less afraid of the dark. He then reads her a book about nightmares. His plan seems to be working.