Casey Anthony’s Own Attorney Shocked By ‘Not Guilty’ Verdict 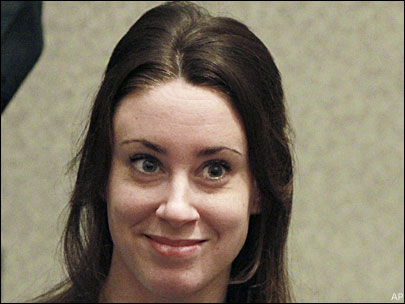 Murder mom Casey Anthony was guilty and everyone knows it – including her own attorneys – and now one of them has admitted surprise that Casey escaped receiving a guilty verdict.  Although Casey’s attorneys worked very hard to defend their client, as is their duty, one of them now says even he was surprised that after deliberating her jury came back with a ‘not guilty’ verdict.

Prosecutors accused Casey of killing her toddler daughter, Caylee Anthony, 2, in the summer of 2008. They alleged she used chloroform and duct tape to murder her, placed the girl’s body in the trunk of her Pontiac Sunfire and later dumped the body in a wooded area near the Anthony family home.

Casey’s attorneys, however, argued that Casey murdered no one and that Caylee accidentally drowned in the family’s backyard pool.  On July 5, 2011, a jury acquitted Casey of the murder and she was released from jail a free woman on July 17.

During a presentation at the Tiger Bay Club of Central Florida on Friday, defense attorney Cheney Mason said he was surprised at the jury’s verdict regarding his client’s case.

“Casey has had her day in court, she’s not saying anything else. And by the way, who is going to believe her anyway,” Mason said jokingly during a presentation for the members of the club.

“Was I surprised? The answer is yes,” he said.  Nonetheless, he added that he believes the verdict was a correct one and said considering the public’s reaction, the jurors were brave to come to such a decision.  “They don’t deserve to be criticized, they deserve to be memorialized,” Mason said.

Yes, memorialized as idiots who allowed a vicious murderer to escape justice.