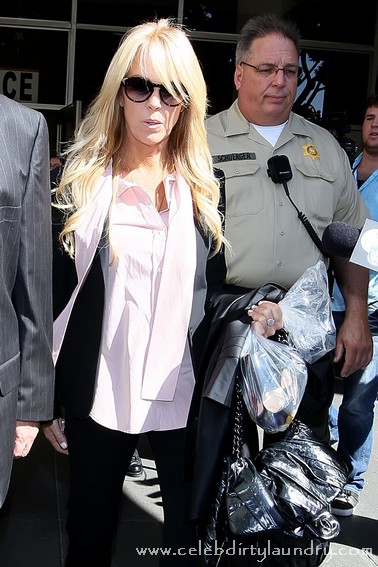 Dina Lohan is speaking out about her daughter Lindsay’s very public troubles, which includes a felony theft charge and her apparently endless struggles with addiction.

“I believe that Lindsay doesn’t drink anymore, and I think it’s gonna be a lifelong struggle with addiction.  But I think she’s gonna be okay,” Dina Lohan told Chris Cuomo in a taped interview scheduled to air on Friday night’s 20/20.  “She’s a young girl struggling.  You know, she’s not perfect – She’s learning as she goes, but she’s learning under a microscope, so I can’t even imagine how that is,” she told Cuomo.

Dina told Cuomo that she could “absolutely not” imagine her daughter being a thief.  Dina also said she has been aware of Lindsay’s issues and has tried to help her since the very beginning of her troubles.  “I knew early on, I just didn’t tell anyone about it. It was a personal situation,” she said.

Dina said her daughter’s troubles began almost immediately after she moved to Los Angeles in 2004 when she was just 18 and began hanging with a fast crowd.  Dina said she personally enrolled Lindsay into a rehab center in California in January 2007.

“You know, you have to be ready as an individual. It’s not just gonna’ happen. You have to hit your own bottom,” she said.  Since her first stint in rehab, she’s returned to treatment several other times and has been busted for other crimes including drunk driving and for instigating a bizarre car chase.

In January, Lindsay completed her fifth stint in rehab — this time at the Betty Ford Center.  Dina said Lindsay’s alleged altercation with staffer Dawn Holland has been blown out of proportion and that, she believes, her daughter is finally taking control of her life.  “I really think she was at a maturation level that she now understands what she needs to get from it. And she grasps that.”

Dina’s media blitz also included a live appearance on Good Morning America on Friday during which she spoke to GMA anchor George Stephanopoulos about Charlie Sheen offering advice to her troubled daughter.

After dispensing pearls of wisdom to LiLo earlier this week on Dan Patrick’s radio show, Sheen gave ABC News advice to pass onto Dina herself, telling her, “It’s never too ate to get a fresh start … quit believing that losing is an option … embrace what you see in the mirror.”

Lindsay’s mom said she doesn’t understand why people draw comparisons between Charlie Sheen and her daughter.

“He’s 45-odd years old and Lindsay’s 24 and I don’t know why they compare [him to my daughter],” she said. “I just think that Lindsay took his advice, and gave him advice as well,” noting her daughter urged Sheen to “Get well.”

What’s amazing is that Dina doesn’t seem to think that she is in any responsible for producing an out-of-control addict.  We know better.