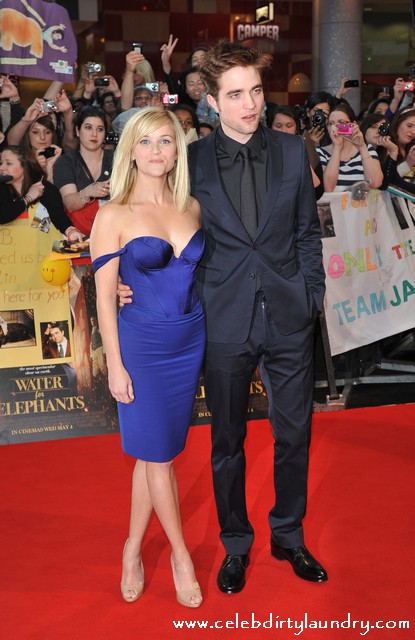 On-screen lovers Robert Pattinson and Reese Witherspoon have been travelling around the world promoting their new film “Water For Elephants.” Today May 3rd, 2011 Reese & Robert attended the UK film premiere of the movie held at the Vue Westfield in London, England.  In most of their other premiere they looked uncomfortable together but in London seemed happy and relaxed.

The two did their best to look affectionate and even stared into each other eyes.  Reese, 35, looked stunning in a tight marine blue off the shoulder dress and Louboutin shoes.   While Robert wore a dark suit.  Fans were so excited to meet they two some of them camped out two days to get a glimpse of them and to get a front row seat in the movie.  Robert who was born and London and Reese signed autographs for happy fans.

The premiere held at a shopping center was a mocked up circus scene complete with a ringleader.  What do you think?  Doesn’t Reese look hot – fabulous dress!  Enjoy the pictures!