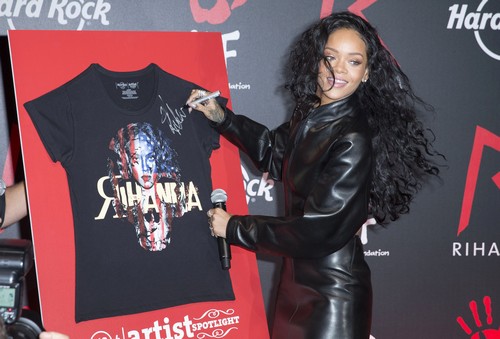 “S&M” singer Rihanna, 23, forgot her pants during her concert at Parque Anhembi Sao Paulo, Brazil yesterday September 19th, 2011.  Rihanna performed in a barely there racy outfit.  She wore black fishnets, a bodysuit that was slashed up to her waist and a black and white top that flashed plenty of cleavage.  The concert was part of her Loud tour and she did not disappoint her fans.

Rihanna has never been to San Paulo before and tweeted just before the show: “SAO PAULO LET’S DO THISSSS!!! #LOUDtourBRAZIL”  After her concert she tweeted to her fans: “SAO PAULO I love you! I will definitely be back!!!”

Rihanna just days ago responded to a fans request of when her next studio album will drop, she tweeted: “THIS FALL!!!!!”   Rihanna hinted that the forthcoming LP may include dubstep influences as heard on her 2009 effort Rated R. She tweeted: “You KNOW how I been lovin Dubstep since Rated R”

Are you excited for Rihanna’s new album?  Sound out in the comments below!