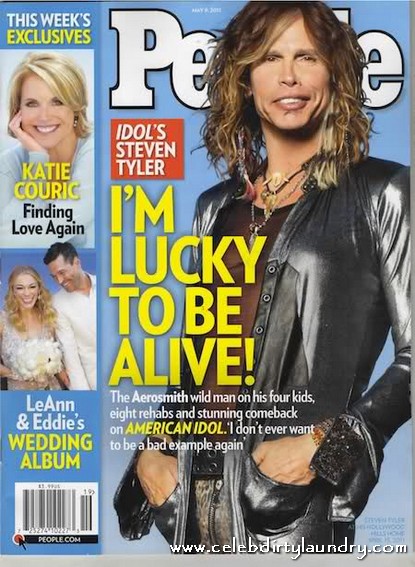 Aerosmith frontman and American Idol judge Steven Tyler claims he would be dead “several times over” if he hadn’t received help for his drug addiction.  Steve has been sober for 16 years but knows he is lucky to be alive because he has abused his body so much with drink and drugs at different stages in his life.

He said, “Left up to my own devices. I probably would have been dead several times over.  If you think going out in front of high-def cameras and millions of people I’m not high on adrenaline, you’re crazy. I’m stoned when that curtain drops. I just don’t snort the curtain dropping. I don’t snort J.Lo either, though I do breathe her in.“

One of the reason he has said he does not need drugs anymore is because he gets a lot of highs from being a judge on American Idol.  Steve has actually breathed new life into the show.  I am not sure the show would have survived the loss of Paula and Simon if they had not got Steve on board.  He has so much charisma he makes you want to watch the show.  The other judges they can get rid of they are so boring.  I am so happy Steve got help with his addictions.  Bravo Steve!