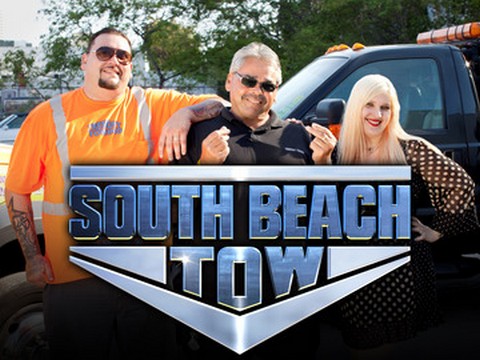 So far in the last week we’ve suggested a bunch of shows for you guys to check out. Great dramas, reality craziness, a bit of comedy thrown in there too. Today we’re up to number 16 on our Top 25 Television Gems Countdown and it’s a bit of a controversial choice – South Beach Tow. I know, I know, there has been a bit of backlash about the show but if their repossessions are actually reenacted, then there are still based on some pretty hilarious stuff!

South Beach Tow features the dramatized reenactments of day-to-day actions of Tremont Towing, a well-established, family-run towing company in the South Beach area.  The show’s Executive Producer is none other than Jennifer Lopez and it is show is the second most popular program on TruTv  and was recently picked up for a second season.  I’ll admity that in my head, it kind of sucks knowing that this stuff isn’t actually unfolding in the most authentic of ways, but I’ll tell you what, that doesn’t make it any less funny to watch.

The Ashenoff family owns and runs Remont Towing but the real hilarity comes from the drivers that they employ.  Jerome “J-Money” Jackson is that big guy that is always using work to try and pick up the ladies. The thing is, these ladies are actually crazy trash bags that aren’t really worth the effort. One episode we say J-Money get attacked and have his clothes ripped off piece by piece as he ran from the “Big Mama” in the tight little dress.  These people are crazy and if you can overlook the fact that it’s not happening live for the first time as the cameras role, it’s definitly worth the laugh you’ll get out of South Beach Tow.