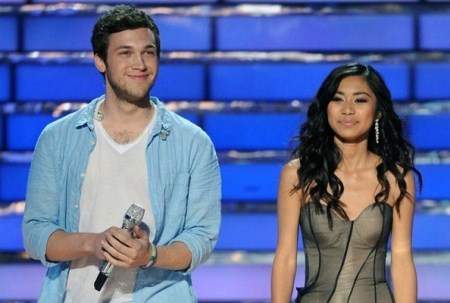 Last night, American Idol 2012 finale justified, Phillip Phillips WINS and Jessica Sanchez LOSES. Did you see the finale episode for the eleventh season, if not you can read our full recap HERE.

The 21-year old from Lessburg, Georgia wasn’t always the front runner to win Idol because the judges had this weird sense of awe over Jessica Sanchez. The judges even told her many times, that she would in fact win this season.

Basically Jessica was living on borrowed time with America after she was voted out by them and the judges saved her. Although she does have a very great voice, she lacks stage presence and the ability to sing anything other than a ballad, so she deserved to go home. When Jessica “released her inner cheetah” and sang “Proud Mary”, her performance was embarrassing and awkward. My only advice to Jessica now is to ‘euthanize’ the cheetah and just trying being herself for a change.

Now for some of the highs and the lows, from last night:

Idol set a world record with 132 million votes and strangely, Ryan Seacrest did not mention percentages like he usually does when the votes are neck and neck. That certainly leads me to believe that Phillip won by a landslide.

Now as far as the entertainment went last night, it was pretty lacklustre and I have to question why Jennifer Lopez (who lip synched through the whole thing) and Steven Tyler, took up so much of the stage with their performances. They are great artitists, but did they need Idol’s assistance in plugging them for their tours? I personally would have liked to see Elton John and Bruno Mars, since the contestants sang their songs. And, wouldn’t it have been great if Phillip sang with Joe Cocker?

Now for the “cheese” of the night! Ace Young who finished seventh on the fifth season of Idol proposed to third season runner-up, Diana DeGarmo. It was beautiful, until, Ace decided to plug the jeweller who supplied the ring. He just completely ruined the whole experience by putting his jeweller’s plug before proposing, cheesy if you ask me!

Now, honourable mention has to go to Joshua Ledet last night, everything he sang only reminded me of how an amazing singer this guy is and deserving to have been in the top two battling it out with Phillip. His raw and remarkable talent is something that is rarely seen on any singing competition.

Another low last night, sadly, was the tribute to Bee Gee Robin Gibb who passed away last week. The top guys just weren’t quite able to execute it and what should have been a performance to honour Gibb, fell flat and embarrassing.

A high last night was Skylar Laine singing with Reba McEntire. There is one thing about Skylar, no matter what she sings, when she’s done, you think she had written the song herself.

In the final duet performance, Phillip and Jessica sang “Up Where We Belong” and I was really looking forward to this one. But, Jessica ruined it by screeching the lyrics so loud that we could hardly hear Phillip. I think a better partner would have been Hollie Cavanagh for Phillip on this one. You can check out the video below, you be the judge.

When the results were finally read, Phillip looked shocked and overwhelmed. Clearly, Phillip didn’t see himself as the winner of Idol. He tried to sing the last song of the night, but was filled with so much emotion that he walked away from his mic and went straight to his parents and family for a hug.

This is why America loves Phillip, he is honest, true, unique, humble, risk-taking, original and always stayed true to his beliefs, which is truly, the making of an American Idol!

In the end, the humble pawn shop worker pursuing his dream caught America’s hearts more than a technically brilliant singer who has been preparing herself for a win, most of her life.

One of my favourite quotes from Phillip this season was, “I know it’s going to be challenging because a lot of opinions will be coming my way, but it’s like the show, I know my music. I know how I want it. I’m not trying to win Grammys or be famous or anything.”

Well Phillip, you just became famous by not trying.

Check out his Idol win below and tell us if you think Idol’s eleventh win was justified with Phillip taking it all!