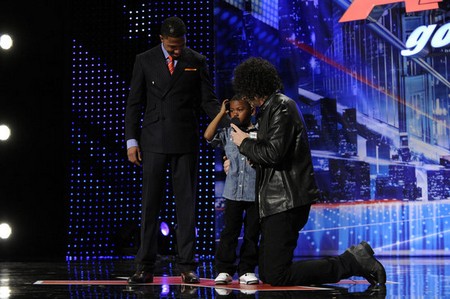 America’s Got Talent airs tonight with a whole new episode.  Tonight AGT is continuing their auditions in New York City as the auditions continue and Howard Stern, Howie Mandel, Sharon Osborne and Nick Cannon continue with their search for the million-dollar act.

Last night it was another night of tears, cheesy performances and winners.  One memorable moment last night was when Mir Money who is seven-years-old took the stage. Mir Money told the judges he knew how to rap, and was not afraid to be on stage. He’s had been rapping for four years and told Howie that he will take care of his family with the million dollars if he wins.  He was adorable, but sadly not a good rapper.

When the judges buzzed to say no, he broke down into tears. Howard was visibly shaken and said ‘he’s not cut out for this.’ Howard was so upset and gave him a YES, Howie and Sharon gave him NO because they didn’t want to prolong the rejection.   If you missed last night’s episode you can read our full and detailed recap here.

The ratings for last night’s America’s Got Talent dropped from last week’s season premiere, they went down 16 percent  –  but AGT still helped NBC win the evening.

RECAP: The judges are ready and this episode is supposed to be “over the top” according to Sharon. Howard is thrilled that his parents are in the crowd tonight. Here we go..

The first act tonight is Ronald Charles who sings, dances and performs. Sharon and Howard are quick to hit the buzzers, I don’t know what Howie is waiting for? Thank God, Howie hit the buzzer as well. Howard’s father comments, he basically agrees with Howard that the guy needs to get a different job. Howard and his father go right up stage and his father tells Ronald, “don’t be stupid, you have to make a living.” Ronald tells Howard that he graduated from high school when he was 15, then he calls Howard, “mam”. It’s a no from everyone and Howard tells Ronald that even from another planet, it would still be a no.

Next is Holly and James, they roller skate on stage and re quick to get buzzers from all three judges, they sucked. Then on stage is a group of mimes that are “lost in the jungle”, yet another disaster. Ok, here comes an Elvis wannabe, I think…well, his time on stage is short and he is thrown off and Sharon tells him he looks like a roadie for the Sex Pistols.

John Pizzi is a comedian ventriloquist and has been on the road doing entertainment for 28 years, anything he can do, he does. The judges love him and he gets a standing ovation. Howie is personally not a fan of ventriloquist, but now he likes one. Sharon loved it, well done. Howard is the first one to admire originality and loves him, it’s wonderful and funny. John is going to Las Vegas.

Next, is Donovan and Rebecca, they have an acrobat and aerial act, but today they will be doing the acrobat. These two are amazing, and the judges love it. Howard loved how fresh and spectacular they were. Sharon felt like she was watch a love scene from a sci-fi movie. Howie is shocked that Rebecca can lift Donovan. Three YES votes get them to Las Vegas.

A group of girls comes on stage next and does some sort of bali/acrobat performance, the judges love them, it’s on to Vegas. Next, the band Ivy Rose performs and it’s another win for the judges, they send them off to the next round. All Beef Patty is a guy dressed in drag and unbelievably he is going to Vegas, well the guy who crushed his nuts last night will have a partner!

Tom Connor is a stand up comic who feels like he has always flown below the radar, so this is big for him. Howie gives him a standing ovation. Sharon thinks he delivered and his timing was great, spot on. Howard had genuine laughs and calls Tom excellent. Howie is a big fan and guesses that Tom has been doing this for a long time.

Tyrece Green, known as “Stepz”, he teaches dance and when he was six years old, his parents were drug addicts and therefore raised by his grandmother. Dancing is in him, it’s what he lives. His mother recently got clean and he is really proud of her. OMG, this guy was amazing, so talented it was ridiculous! Howard thinks he is talented and can dance but doesn’t think this is the act people would pay for. Howie thinks a lot of the moves were unique and he did bring something to it, he loved it and thought it was great. Sharon thinks he has amazing talent, but will he fill arenas doing this, is he the next superstar? Howie gives a YES, Howard says “even if we waited a hundred years, it wouldn’t bring about the show Howie imagines in his head.” Sharon has thought about it and she is sending him to Las Vegas. Thank goodness, Howard is delusional, he would put through some old man rapping and guy smashing his nuts, but doesn’t want to put this guy through, stupid.

The last act of the day are some really buff guys that are going to at least get Sharon excited. The name of their group is the Savage Men. So far, they suck, all they are doing is showing off their bodies; taking off the shirts, then their underwear and the last thing they do is moon the audience. Howard thinks women prefer his physique to these guys on stage and proves it by getting up on stage. If there is one thing I never want to see ever again, it’s Howard dancing. Howard is back at the judges table and he gives the men a YES, Howie is a NO and Sharon says she likes her men dirty and these guys were too clean, so it’s a NO.