America’s Got Talent: Howie Mandel vs. Howard Stern ‘The Gloves Are Off’ (Photo) 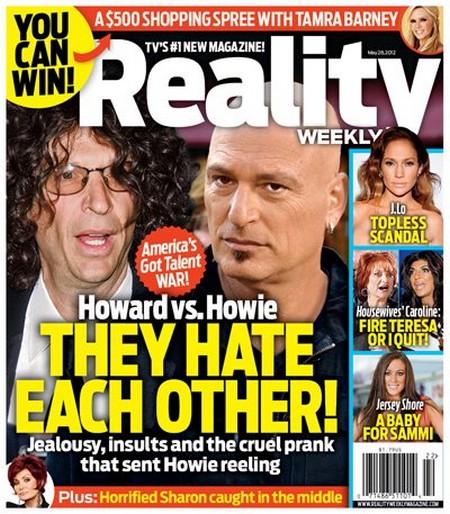 America’s Got Talent was back this week with their seventh season, did you watch the episodes? If you missed anything, you can read the recap for the first show HERE and the second HERE.

Now, what would another season of reality tv be without controversy? Usually we see it from the contestants, or sometimes even their meddling parents back stage, but this time….its the judges! According to Star magazine, returning judge Howie Mandel and new judge Howard Stern hate each other and poor Sharon Osbourne is stuck in the middle. Now there were rumours of this a few weeks ago, but from what we have seen in the premiere and second episodes, this fued does have merit!

The two judges are apparently at each other’s throats and do you know what is causing all the drama? They are fighting to be “the one” in the limelight!

Now Howard did promise to be “Pierce Morgan on Steroids“, we just didn’t think it was all going to be aimed at poor Howie.

I can see Howard being a big diva and wanting all the attention to himself, it must be hard for Howie because former judge Pierce Morgan and Sharon Osbourne, are nothing like that.

In the premiere episode you could really see that Howard had that “rock star persona” when he came on stage and.. you know he loves it! The audience’s thundering shouts and applause for Howard were no way near what poor Howie got when he ran past everyone like lightening hoping not to get touched because he’s a germophobic.

Now Howie was so miffed at Howard getting all the welcoming applause in the premiere episode, that he staged him up by making a grand entrance in the second episode and arriving in…. some sort of jet pack! Seriously!

Howie is also supposedly upset that the show relocated to New York, just to accommodate the “Shock Jock”. Which by the way, is really huge considering how much Simon Cowell has shelled out for Howard’s pay cheque.

Last night the feud continued when Howard said something about  “why am I doing this show” and Howie, not looking that happy, said, “I’ll give you fifteen million reasons why”. Obviously Howard is getting the BIG bucks and that is no doubt grating on Howie’s nerves as well.

What do you think of the feud? Take our poll and sound off your comments below, whose side are you on, Team Howie or Team Howard?