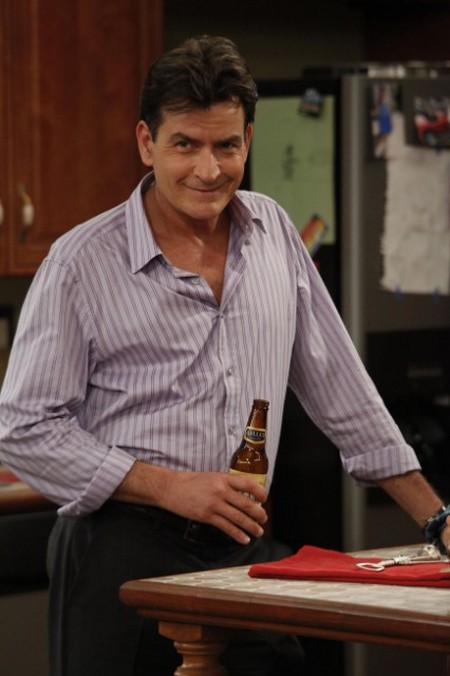 Tonight Charlie Sheen is back with the premiere of his new and highly anticipated show, “Anger Management” on FX. This is a first step for Sheen in returning to sitcom TV since his firing from “Two and a Half Men” by ABC.

Charlie stars as Charlie Goodson, a former baseball player who lost his job due to rage, is now a non-traditional therapist specializing in anger management, like Jack Nicholson did in the film version. Charlie has a very successful private practice, he holds group sessions with regular patients and even does pro bono counseling for an inmate group at a state prison.

In the promos, Charlie walks away from a fiery train wreck, unharmed and with a naughty smile, he says, “Everyone deserves a 24th chance.” Like Alan in “Two and a Half Men”, Charlie is now a pathetic divorced dad.

Charlie tries to show a group of patients how to redirect their rage by hitting a punching bag, he says, “You can’t fire me, I quit”  and “You think you can replace me with some other guy, go ahead, it won’t be the same.” Now who do you think that was directed at?

FX “Anger Management – Premiere Official synopsis: In the opener of this series about a therapist specializing in anger issues himself, Charlie returns to therapy after an unpleasant encounter with his ex-wife’s new boyfriend. Later, a forgettable woman from Charlie’s past shows up as a new patient in his group therapy.

Tonight the premiere of Anger Management has two episodes, back to back. The first one is titled, “Charlie Goes Back To Therapy” and the second, “Charlie & The Slumpbuster”.

Will we see any “tiger blood” or “winning” tonight? The only way to find out is to stay tuned as we live blog the new FX show at 9PM EST.

RECAP: This first episode begins with Charlie leading an anger management group.  His newest patient, Lacey, shows up late for his group and immediately she’s fighting with Charlie’s neighbor before even making it through the front door.  By the time she introduces herself, we also know that she is court ordered to attend group because she shot her boyfriend in the balls.  Obviously he cheated on her.

Charlie’s daughter Sam has issues.  She came in the door, locked it then unlocked it…repeat clicking sound about 50 times as one of the old regular group guys explains that she has OCD. Charlie excuses himself because Sam is obviously upset.

Charlie gets into a heated fight over Sam going to college, with his ex-wives new boyfriend, Sean (Following me?).  Sean sees no point in a kid going to college because the unemployment rate for college graduates is so high. Lisa (the ex) really likes Sean and hates being stuck in the middle of two guys.

The patients keep getting better.  This jailbird slit a guys’ throat because he was frustrated.  Frustrated that his victim was still alive, that is.  Charlie admits that he wanted to bash Sean’s head in and the jailbird’s respect him more now for sharing that. Charlie wants to go back into therapy himself but basically trusts no one to help him.

Well, not true.  Kate, the chick he’s hooking up with is the only therapist he trusts.  Charlie decides to go back and apologize to Sean for his bad behavior. After he apologizes Lisa tells Charlie she already dropped Sean.

The second episode begins when Charlie is out on a date with Daytona, who requests a “blue” drink.  His ex Lisa and daughter Sam stop at the same place and run into him.  He comments on how he and Daytona are like two ships passing in the night and hers is headed to Legoland.

Mel is a bit weird and new to the group.  She is ready to talk as soon as she walks through the door.  She describes a hookup she had years ago, with a baseball player.  Long story short, the player was Charlie and she wants to know if the urban legend is true, do players that are doing poorly sleep with the ugliest girl in town.  In other words, was she his “slumpbuster”?

Charlie admits he remembers her and apologizes as they sit drinking coffee.  She explains that she had a ton of plastic surgery to try to look like something other than a slumpbuster.    He decides to make her dinner and his therapist friend Kate thinks he is nuts.  This woman has stalked him for 16 years, outted him in front of his patients and instead of being upset he’s cooking her dinner.

Ironically, Jen invited Mel over to make jewelry with Charlie and Sam.  Talk about awkward.  Jen is having a field day taking pictures of Charlie and Mel.  Did I mention that Mel looks like a dude and is wearing a t-shirt with cats all over it?

He finally tells her she was his slumpbuster.  They end up hugging it out in Jen’s kitchen.