Aretha Franklin Calls Off Her Wedding Just Weeks After Getting Engaged 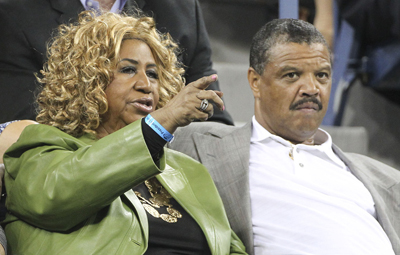 Just weeks ago, soul singer Aretha Franklin sounded like any other bride-to-be. After announcing that she was engaged to her longtime boyfriend William ‘Willie’ Wilkerson, the 69-year-old was immersed in all of the details for her “June or July” wedding and contemplating a Vera Wang wedding gown versus a Valentino one.

However, something seems to have gone off course for Aretha’s big day, as E! Online is reporting that she’s called the whole thing off!

“Will and I have decided we were moving a little too fast, and there were a number of things that had not been thought through thoroughly,” the “Respect” singer said in a statement. “There will be no wedding at this time…We will not comment on it any further because of the very personal and sensitive nature of it.“

And while the press release lacks any juicy details, the couple has reportedly been together on-and-off since 1987, which you would think would have given them enough time to talk out any issues!

Perhaps, it was a financial issue that caused the couple to end their engagement. Aretha is reportedly worth $60 million and has four adult sons, who probably cautioned her to get a prenup.