Aubrey O’Day ‘Sluts It Up’ on Celebrity Apprentice Task 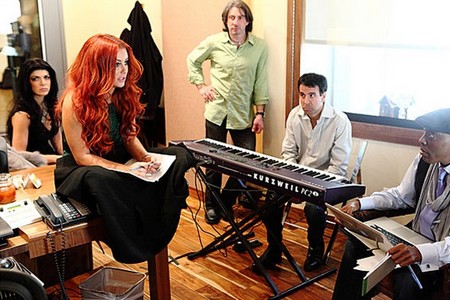 A few weeks ago on Celebrity Apprentice, when Aubrey O’Day pushed the proverbial envelope too far with Arsenio Hall, he called her a whore.

Of course, Aubrey got very upset about the name calling, but what does she go and do after that, well she proves to America that she does indeed act like a whore by putting her arm around Paul Teutel Sr. and calling him “daddy“, to which he replies, “Daddy’s going to spank you” and she laughs.

Aubrey is 28 years old and Paul is 62, her calling him daddy and his promising to spank her is just “wrong” and “disturbing.”  Funny how Aubrey thought that was hilarious yet doesn’t like being called a whore!

During last week’s show Aubrey asked the CEO of Big Sam if she could get creative and he very ‘clearly’ said, “you can get as creative as you want to, just remember, your mother, your grandmother and your child would all watch be watching this, you need to think about who your audience is.”