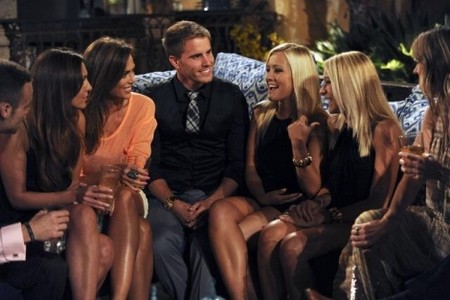 Tonight Bachelor Pad is back with the 15 remaining crazy characters from “The Bachelorette” and “The Bachelor” with 3 super fans in a 2 hour episode on ABC. The contestants will battle it out for the chance to find love and win $250,000.00. Last week, two super fans were sent home, if you missed the episode, you can read our full and detailed recap here. For a full cast list you can check out all the info here.

Last week, men and women who couldn’t find love on “The Bachelor” and “The Bachelorette” were back with, for the first time ever, ‘super fans’ that were added to the mix.

Rachel and Jaclyn started dissing Blakely, but not far behind is Blakely which gets Rachel and Jacklyn to put on their fake smiles and pretend to be BFF’s with her.

Ed strips down to his birthday suit and heads into the pool before Chris Harrison even gets a chance to officially welcome everyone. In the first competition, everyone goes outside and there are hearts suspended by cranes. The couples have to go inside the hearts and remain inside, even when they are titled forward, the couple that finds the strength to hang on the longest wins. Brittany and David are the winners, along with Erica, Brittany’s twin sister.

David is thinking game play, he wants the twins to team up with him and tells everyone that it is going to be the fans against the veterans and he plans on voting out Erica R who when she finds out what he said, comes out on the attack against him and promises if she does stay in the house, she is going to make his life a living hell.  In the end, Paige and Chris “Swat”; two super fans were sent home.

Tonight, the action heats up between a fan favourite and fellow gorgeous contestant, Rachel, at a rock concert. A Rhythmic Gymnastics challenge will put the contestants’ grace and agility to the test. During a 3-on-1 date features a soapbox derby and race to one of the women’s hearts.

There will be a “shocking pre-dawn decision” and rumour has it that more super fans are going home, you don’t want to miss this episode.

Tonight’s episode is going to be an exciting one, so be sure to tune in for our live coverage ABC’s Bachelor Pad 3 at 8PM EST! While you wait for our recap hit the comments and let us know what you thought of last week’s premiere episode!

RECAP: Erica R. is still riding high on receiving a rose last episode and she’s still determined on making David’s life a living hell. Britney and Erica are fighting and getting on everyone’s nerves. Honestly, it’s like watching Jerry Springfield.

The next day, Chris Harrison congratulates everyone on still being in the competition and reminds them that today there are two roses up for grabs. Chris really wants to get a rose, he’s got something going on with Jamie and doesn’t want to go anywhere.

The contestants go outside and find gymnasts doing Rhythmic Gymnastics in honor of the summer Olympics that are going on right now. Each contestant will learn a routine and perform in front of a panel of judges. They have two hours to learn their routines from the professional choreographers.

The men are complete disaster, no surprise that they lack the ability to be graceful. David is taking the competition really serious, he knows if he loses, he is probably going home. The men have to wear one piece leotards and they are having a hard time getting in to them.

On the ladies’ side, Erica R. seems to be the worst contestant so far, Blakely and Jamie are doing really well. The women don’t think it can get any worse, until they discover the once piece outfits they have to wear.

The first two judges are former Bachelorette Ashley and her fiancé, J.P. The other judge is Tasha Schwikert, an Olympic medalist. The ladies are first and have a right to feel mortified, they are a train wreck.

The guys are amazing, they have energy, charisma and technique; they definitely put the ladies to shame.

The judges deliberate, the worst lady is Erica R. and the worst man is Ed; they both get a vote against them. The best lady is Blakely, the best man is Michael.

Erica R. is feeling a lot of anxiety, this is the second week in a row that she has finished last, so she heads out in search of Michael who promised to have her back. Meanwhile, Michael doesn’t know if he can keep his promise, because he likes a lot of girls in the house.

Its Michael’s choice for his date, he chooses Rachel, Lindzi and Donna to go with him. Erica R. is furious that Donna was chosen, because she is a fan.

The date starts at a concert and Donna is clearly star struck with Michael who she has a huge crush on. Rachel takes no time moving right on in on Michael, she grabs him and it doesn’t take long for the two to be playing some tonsil hockey while poor Donna looks on devastated.

Back at the house, it’s Jamie’s birthday and her partner Ryan has made her a cake along with other surprises. Blakely is still furious that Jamie kissed Chris and Jamie’s game plan is to change partners and join up with Chris.

Michael takes the time to spend with each lady, his time with Rachel is just about kissing. With Donna, she shows him a picture she drew of him, then the two kiss, not because he’s into her, but because he wants to give her a little of her fantasy. Its time for Michael to give out his rose, he gives it to Rachel because he had the best connection with her.

Chris and Jamie get some alone time, Chris reveals that he wants to be her partner and they seal it with a kiss.

Chris tells Blakely that he has been strategizing with Jamie and told her he wants to be her partner, but he wants to remain with Blakely.  Basically Chris will do anything to win the money, he doesn’t care if he has to play nice with Blakely to do it.  Jamie walks in the bedroom and finds Chris wrapped up with Blakely on the bed. Jamie finds its really hurtful and she finds it unfair that Chris did this to her.

Its time for Blakely to choose her three men, she chooses Chris, Ed and David. The date is a chance to participate in a soap box derby race.

Chris is not happy that Blakely choose to bring David on the date because he is a fan, but Blakely did it because she doesn’t want Chris to run things. Ed wins the race and Chris is thrilled that David came in last.

Blakely is having some pool time with her three guys when David takes the initiative to have a little alone time with her and tells her that if she has his back, he will have hers till the end, although, there doesn’t seem to be any chemistry for the two. Meanwhile, in the pool, Ed asks Chris if he is really into her. Chris basically answers that they are in the game together. Chris and Blakely are alone, he is still trying to convince her that he is in to her, but she is having her doubts.

Time for Blakely to give out her rose and admits it was really hard to make her decision, she gives the rose to Chris.

Things are really getting frisky and Ed is one hot mess drunk with Jaclyn is throwing herself all over him.

The twins realize that they are on the chopping block, so they approach Tony to save them. It doesn’t take long for the twins to start arguing again, there is so much drama and everyone just wants to sleep.

The roosters are crowing and the twins are still fighting for over seven hours now. Britney is packed and leaving the house, Erica doesn’t want to leave because she has a crush on David.

Erica goes to say goodbye to David, the twins are on their way out the house and they are still arguing all the way out the door. Meanwhile, the rest of the house is thrilled that they are finally gone.

The next morning, the house is quiet without the twins and David is shocked that they are gone and is pretty sure he will be picked off.

At the Rose Ceremony, Chris H. announces that since Britney and Erica have left, all the women are safe. Michael and Chris are also safe because they earned a rose. One guy is definitely going home, the ladies have to decide who they want to send packing. Ed has one vote against him because he performed the least best in the competition.

Kalon plants the seed in Lindzi that it would be better to keep David in the game than Ryan, strategically.

Meanwhile, Reid campaigns to get rid of Ed and Sarah tells him. Ed is upset, he hooked up with Sarah the night before and feels betrayed.

Time to find out who is going home tonight, six roses to hand out and they go to’; Kalon, Reid, Nick, Tony, David and Ed. The guy leaving tonight is Ryan, the 32 year old virgin didn’t win love or money.