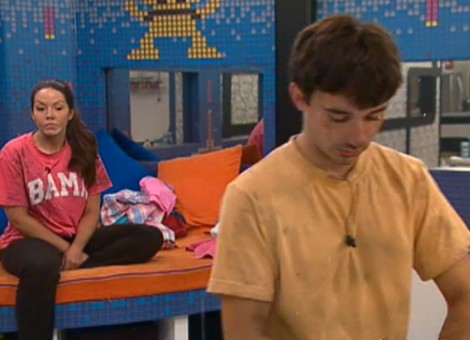 I honestly thought that nothing could top Dan Gheesling’s funeral on Big Brother 14, but I was wrong. Last week’s eviction episode was the most shocking betrayal ever and exactly why BB fans love this show. Dan truly deserves to win after he gave Danielle Murphee one of the biggest and most shocking blindside evictions by sending Shane Meaney home. Did you see the episode, if you missed any of it you can read our full and detailed recap here for you.

I am truly in awe of Dan after the last episode. He blatantly lied throughout the game and was the number one target in the house, yet he manages to stay on top while playing his fellow house guests like chess pieces. If you think Dan’s funeral and his blindside evection in the last episode was amazing, you won’t believe what Dan does next. In round one of the final HoH competition, Dan totally takes control of Danielle, again! Even after he back stabbed her and sent her boyfriend home, he still has her confidence! How do you spell DUMB?

Spoiler alert: If you’re one of those people who doesn’t like spoilers, stop reading now! We have some juicy spoilers for you about Big Brother 14 week finale.

The first round of the final HoH is an endurance competition and one house guest was actually convinced to drop out, seriously!  The houseguests are being dunked in water and slammed against a wall; Ian Terry starts choking and eventually falls off, leaving Dan and Danielle.  Dan asks for some time alone with Danielle, so Ian goes inside to dry off. Dan then asks Danielle to drop off and even though she is hesitant, the idiot drops off and Dan wins!

In the second round there is another physical challenge, but this time Dan is sitting out because he won round one. Danielle and Ian have to fight it out to see who will battle it out in the third and final round with Dan.  Ian wins round 2. Danielle is furious and tells Ian that if he takes Dan to the final two, she will turn the jury against him and he won’t win the money.  Dan has a plan and involves Danielle to pressure Ian in to throwing the third round so Dan can convince Ian that he will evict Danielle, but Dan really plans on stabbing yet another house guest in the back, when instead he evicts Ian and takes Danielle to the final two.

If, or I should say “when” Dan makes it to the final two, his winning will all depend on whether the jury is going to appreciate his brilliant game play or take everything he did against them personally.

Big Brother airs Sunday night at a NEW time 8:30pm when we will get to see how part of the final HoH competition plays out. We will be live blogging the show with all the up-to-the-minute details so make sure to come back to Celeb Dirty Laundry and watch the show with us. Can’t wait to see all the drama, how about you?