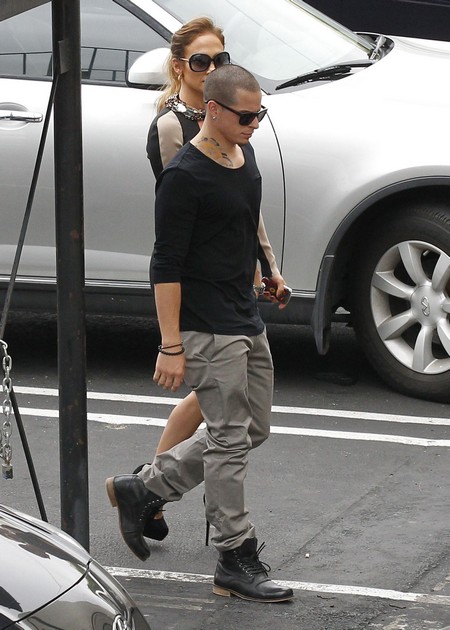 What to Expect When You’re Expecting star, Jennifer Lopez, is currently living the reality show, “What to Expect When You Tell Your 25-Year-Old Boyfriend You Want Kids”. And it’s not a romantic comedy.  Of course what was she expecting anyway with toyboy Casper Smart – a father/sperm doner for new children she wants to have?  She totally looks like the dude’s mom and at least Casper knows it, even if Jennifer doesn’t.

The National Enquirer reports that Jennifer’s much younger boyfriend, Casper Smart, was shocked and upset when he heard her give a recent interview confessing she wanted more children. Jennifer already has four-year-old twins with ex-husband Marc Anthony.

“Casper’s got absolutely no interest in becoming a father,” an insider told the Enquirer. “He freaked out when he read Jen’s comments, and it forced a very awkward conversation between them. He had to know if she was serious about it because it’s certainly not part of his agenda for at least another 10 years.” The insider said Jennifer smoothed things over by reassuring Casper her comments were “misconstrued.”

Forty two-year-old Jennifer doesn’t have ten more years on her biological clock. If she wants something to happen, it has to happen soon. “Casper told her he’s too young to be a dad and needs to focus on his career right now.”

I thought Casper’s career was making Jennifer happy. He went from just another backup dancer to becoming the choreographer in her upcoming summer tour in the blink of an eye AND got national exposure last night as he danced solo and half naked with her while she performed “Dance Again” on the American Idol stage.

The Daily Mail reported that the May-December couple were spied bickering in Casper’s car before he dropped her off at the show earlier that day so there could be some truth to the Enquirer’s story but I’m not buying it.

Sorry all you romantics out there but I have to stay cynical on this one. Casper may or may not love Jennifer but it’s in his best interest to stay with her and keep her smiling. If he knows what’s good for him, he’ll try to give her a baby if that’s what she wants.

Because Jennifer Lopez is used to getting what she wants. If she doesn’t, she finds a way to get it. Just last year she was on the American Idol stage with Anthony. As my favorite reality show dancing teacher, Abby Lee Miller says, everyone’s replaceable – even 25-year-old backup dancers.