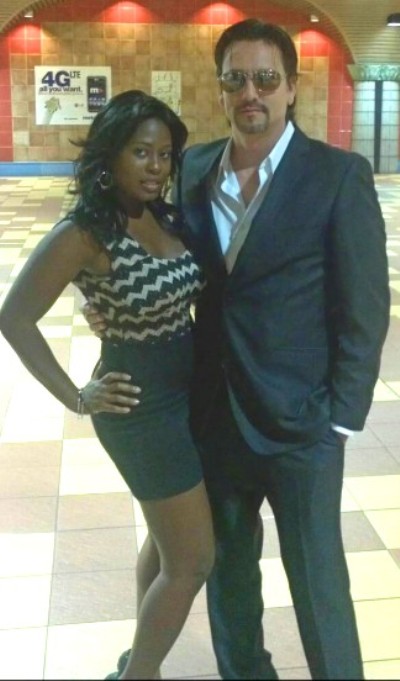 Dion Wade and Tennille Williams are ready to make their move as the newest celebrity It couple. The dynamic Hollywood twosome met last year and became engaged just three months later quickly creating a successful personal and business relationship. They’ve already appeared in over 30 Hollywood productions but decided to take matters into their own hands for their latest creative venture. They produced, wrote and starred in Ana’s Story, a short on the gritty world of prostitution which will appear nationally through network syndication later this year.

And like most entertaining Hollywood couple, Dion and Tennille are ready for their close-ups on reality television. The show, appropriately titled Dion & Tennille, will focus on the two as they try to make it as big players in Hollywood while balancing their everyday lives. Production for the weekly web-series began earlier this year. Celeb Dirty Laundry had the opportunity to sit down with Dion and Tennille to discuss their busy plans for the future, what it takes to become a power couple in LA and why they chose to make Ana’s Story.

Dion: “I felt the story was very well written, first of all.  Human trafficking is a big epidemic in the United States as everyone knows, but doesn’t talk about.  I felt we could put together a deep meaningful piece and at the same time bring awareness to this problem.”

Tennille: “Well every time there’s a movie about prostitution, it’s always being glorified ie. Pretty Woman, great movie, but not realistic. Or when society talks about women on the street, they’re constantly judging them or degrading them… just simply putting these women down, without knowing their story, without asking how did this woman end up with such a horrible life. When in reality 60% of prostituted women were forced or persuaded into that life, and they feel like they don’t have a choice because society has shut them out.  So when I wrote ‘Ana’s Story,’ I just wanted to tell people a more realistic story. Neither of us have a personal connection with this subject matter, however we did meet and interview a few women who shared their stories with us which inspired this story.”

How did you two meet? In the business?

Tennille: “It was destiny! We were at the Teen Choice Awards Party and I left early, but when I got home I felt like I was forgetting something, so I decided to go back to the party.  Dion showed up late, but just in time we ran into each other and it was love at first sight.”

How is it like working with your spouse? Bumpy?

Dion: “Working with my wife is a gift…. Although it’s challenging at times, I would say the time we get to spend with one another being creative and growing together in this business is priceless. I am very grateful and thankful to be in this position with her.”

Tennille: “I love working with my husband, but like he said, it can be challenging at times, but it’s worth it.  I’ve always wanted a partner in life that shared the same ambitions and dreams that I have, and  together there’s nothing that we can’t do.”

What do you hope people take away from Ana’s Story?

Dion: “I think all we can hope for as artists is to touch someone, bring our audience closer to a truth or immerse them in a story and bring them joy.  I would hope people would walk away from ‘Ana’s Story’ with a deeper understanding of the torturous lives these women live and maybe even change their perception about them.”

Do you prefer being in front or behind the camera?

Tennille: “I love being in front of the camera, but after writing and producing ‘Ana’s Story’, I’ve developed a love for behind the camera work as well.”

Dion: “That’s a tough one for me. I have a deep passion for both. Bringing the pages to life as a director is an amazing feeling, on the other hand becoming a character and bringing it to life is equally amazing. As long as I am involved with creating art, I am happy.”

Tennille: “Yes! 2013 is going to be an amazing year for us. I just finished my second script, which is a romantic drama, and my husband will be directing this one as well. We are also in talks with the network to do an entertainment-type talk show, so that’s really exciting.  I just want to keep entertaining people and that’s what we plan on doing.”

Dion: “I just hope people love what we’re doing and we can continue to do it.”

Check out the couple’s YouTube channel. Do you think they have what it takes to join the ranks of the Hollywood elite?