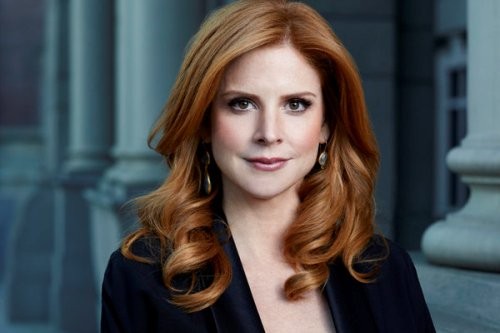 USA Network’s legal eagle drama series, Suits, has received critical acclaim from audiences and television critics alike. A show that demands attention like this does not cross our path very often. Quite simply, Suits is unlike anything we’ve ever experienced in the USA stable. The quick-witted dialogue serves as the matrix of the intelligent plots and the monolithic characterization, while the narrative yields fruitful and character-driven set pieces. Suits, currently in its second season, has been branded as the new legal show to pay attention to, much in the vein of The Practice and similar themed television productions.

According to his USA Network biography, the creator of Suits, Aaron Korsh “relied on his collegiate experiences at The Wharton School and on his subsequent career as an investment banker in Manhattan during the late 1980’s and early 1990’s. In fact, ‘Suits’ was originally set in the world of Wall Street, until USA redeveloped it, placing the original characters in the procedural world of law. For this modification, Korsh relied on his long –standing love of legal procedurals with a character bent. In fact, were it not for his dedication to watching television versus doing actual schoolwork, ‘Suits’ would not exist today.”

Donna Paulsen, the strong-willed symbol of chauvinistic reproach, is played by the beautiful and talented Sarah Rafferty; who not only lights up the screen on a weekly basis, but who also breathes life and a fourth-dimension into her character. Celeb Dirty Laundry had the honor and privilege to speak to Sarah about her character, her acting career, and the obstacles of filming a weekly television show.

Do you stay in character when filming the show? When you go home, do you leave Donna behind at work?

Yes I can say I definitely leave Donna behind because my life as a mom is decidedly less glamorous than Donna’s life. The outfits are much different

What is your dream role as an actress?

Oh God, that’s impossible. That’s so – oh that’s such a good question and so impossible. I’m going to say that there’s a chance that I might currently be playing her and I’ll leave it at that.

What are the biggest obstacles you have faced on the set of Suits?

Biggest obstacles, you know, it sounds sort of lame but sometimes it’s really late and we’re really tired and that can just be hard. It’s just the nature of shooting something. We can be there at 4:00 in the morning trying to shoot something and, you know, you can be – it can be hard at times to remember what you were going to say or things like that.

Sometimes, you know what’s fun about shooting when you shoot exteriors, when you’re shooting on the street in Toronto, Donna and Harvey had such a great scene on the street when he comes to give her her bonus check and get her back, to come back to the firm.

And it was just a lot of picking up the pieces like and hurrying and trying to just get it while we held the traffic, let’s just get a shot in, that kind of thing. So it was kind of – it’s kind of exciting and challenging at the same time to be dealing with those kind of elements.

If you could give advice to young actors, what advice would you give them?

I think I would say something that has been said which is just is to keep studying, like keep going back to class and keep working, keep working on your craft and keep digging. And I think I’d also just say that it’s a marathon, not a sprint. Like, you know, don’t give up, keep going. I would say that.

The show’s second season premiered on the 14th of June, 2012, to 3.7 million viewers. Currently in hiatus, the show will return on Thursday, the 17th of January, 2013, for the last half of the second season. Fans of the show are also able to view all of the 22 episodes aired thus far, On-Demand, at USA Network’s Video Hub.

You can also view the exclusive catch-up promo below!