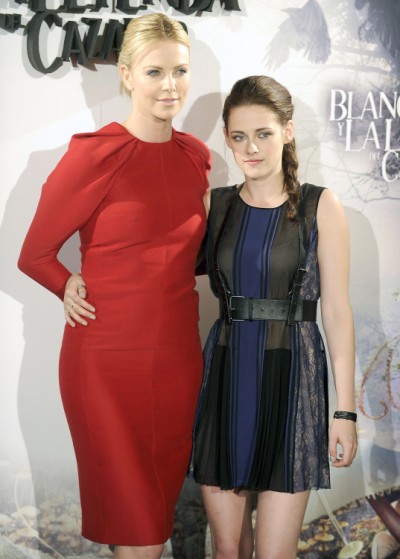 Charlize Theron creeps into Robert Pattinson’s bed at night and sniffs his socks and underwear!

“Charlize likes to come into my house at night and sniff my socks and underwear. When you do stuff like that, there are necessarily some surprises. It’s not my fault. I’m really nervous now that there might be something wrong with my socks. I never paid attention to it before. It’s so weird.”

This odd line of questioning was in response to Charlize and Kristen’s earlier interview while promoting their movie, Snow White and the Huntsman. A reporter asked the women, “What’s really NOT sexy about Robert Pattinson?”

Kristen naturally shied away with an, “Oh God” but Charlize went for it saying, “I’m gonna have to say his socks.”

Kristen didn’t seem too surprised by her co-star’s admission and she definitely doesn’t seem to mind her boyfriend’s smell. The two have been inseparable at Cannes and were caught canoodling Wednesday night at her On the Road after party. Seeing evidence of Rob and Kristen kiss is kind of like spotting a white elephant, people say it’s real but you have to see it to believe it. Well, Rob and Kristen have given the world evidence that they are very much on and still a couple.

But would you kiss Rob if he had stinky drawers and feet?