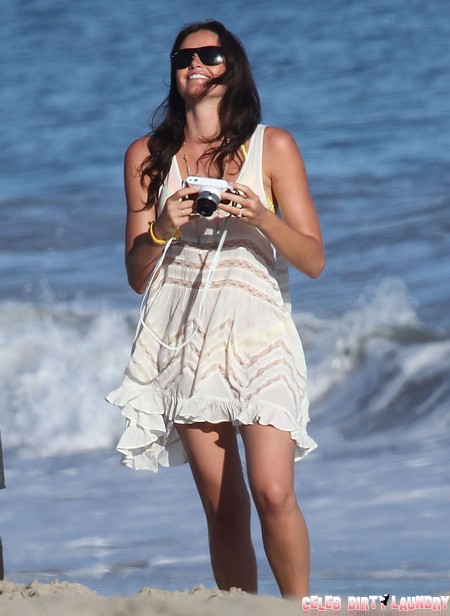 The winner of season’s 16 of The Bachelor, Courtney Robertson, although, I wouldn’t call being the ex-fiancé of hair geek Ben Flajnik necessarily winning, but whatever, is now dating Emily Maynard’s reject from The Bachelorette, Arie Luyendyk, Jr.

Courtney has confirmed to Life and Style magazine that after a “one-time hook-up” with Luyendyk when they were spotted kissing and canoodling at a restaurant in Phoenix, Arizona on Oct. 11, that they are now dating.

And by the looks of their most recent encounter, with the two of them looking more intimate and lovey-dovey while strolling in a park in Venice, California; it seems that they are really playing it for the cameras to let the media know that they are together.

Doesn’t it seem a little strange that after only a couple of days of announcing their split, Courtney was seen kissing Arie, another semi-famous reality star, passionately in broad-daylight at a public restaurant? Doesn’t this scream media-whore to you? I mean, it’s no secret she was a manipulative hussy on the show, calling other contestants “horsey-face” and “fatty” whilst skinning-dipping with the prized possession, Ben Flajnik. Or when she tried on dresses before the season finale even aired as a blatant publicity stunt. And posing in bikinis on covers of magazines every chance she got. When you have no talent to speak of (like singing, dancing or acting) you go to drastic measures to stay relevant. And dating Arie, within days of breaking it off with Ben, seems to me a little drastic. Though, Courtney states to the magazine, her reasons:

“I was miserable with Ben; he treated me so badly,” Courtney says.  Apparently, she had planned to move to San Francisco to be closer with Ben, “but he was all like, ‘I just turned 30, and I’m not ready,’”.

Which, at first I didn’t believe, but I’ve come to the conclusion that Ben must have a humongous ego. Whoever can perpetually keep a middle part down that mess of a hairstyle and thinks it actually looks good, must have a huge set of you-know-what. You would think two huge egos would get along and live happily ever after, but no…the world isn’t big enough to hold both of their egos at the same time without exploding.

What do you guys think? Can this new romance between Courtney and Arie be true love? Or is Courtney playing the media again to get her name out there now that her sham of a romance with Ben is over? Put your comments below!